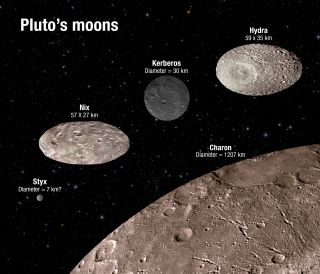 This illustration shows the scale and comparative brightness of Pluto’s four tiny moons, as observed by NASA's Hubble Space Telescope from 2005 through 2012. Pluto’s binary companion, Charon (discovered in 1978) is placed at the bottom for scale. The textures seen here are purely for illustration purposes.
(Image: © NASA, ESA, A. Field (STScI))

Pluto's moons are even stranger and more intriguing than scientists imagined, a new study reveals. The movements of the dwarf planet's four tiny moons are chaotic as a result of the complex and dynamic gravitational tug of Pluto and its largest, closest-orbiting moon, Charon. [Full Story: Pluto's Moons Are Even Weirder Than Thought]

Amazing images from the surface of a comet

A deluge of newly released photos from Europe's Rosetta mission reveals the haunting alien landscape on the surface of a comet as it orbits the sun. [Full Story: Eerie Comet Landscape Revealed by Rosetta Spacecraft Photos]

An affordable way to get astronauts to Mars?

NASA could land astronauts on the Red Planet by 2039 without breaking the bank, provided the space agency takes a stepwise approach that includes a manned 2033 trip to the Mars moon Phobos, according to a new study. [Full Story: A Manned Mission to Mars: How NASA Could Do It]

The United States first stepped out into the void of space 50 years this week. On June 3, 1965, NASA astronaut Ed White left the safety of his Gemini 4 spacecraft equipped with a spacesuit, a tether and a small gas gun for maneuvering. [Full Story: Space Exploration Changed 50 Years Ago Today: The 1st US Spacewalk]

Another problem for LightSail

A tiny cubesat has fallen silent in orbit for a second time, just two days before it was supposed to deploy its solar sail. The nonprofit Planetary Society's LightSail spacecraft has not communicated with Earth since Wednesday afternoon (June 3), shortly after an apparently successful solar-panel deployment. [Full Story: LightSail Solar Sail Spacecraft Goes Silent Again]

NASA may send astronauts back near the moon

While NASA does not yet have specific plans for human missions beyond 2021, the agency is in the early stages of developing a sequence of missions in cislunar space in the 2020s to prepare for later missions to Mars. [Full Story: NASA Developing Plans for Human Missions to Cislunar Space in 2020s]

Gamma-ray bursts — explosions lasting no more than a few minutes but that release more energy than the sun will emit in its lifetime — may be coming to Earth via the world's most powerful lasers. [Full Story: It'll Be a Blast: Future Lasers May Mimic Space Explosions on Earth]

The United Arab Emirates' space agency has unveiled its official strategy and operational plan, and it takes bold aim at Mars with a planned robotic mission to the Red Planet by 2021. [Full Story: United Arab Emirates to Launch Mars Mission by 2021]

On May 31, NASA's Cassini spacecraft made its final flyby of Hyperion, Saturn's spongy moon — and snapped some fantastic images of this porous and punched-in world in the process. [Full Story: Cassini Spacecraft Sees Final, Stunning View of Saturn Moon Hyperion]

Getting astronauts to Mars will take all the spacefaring expertise the United States can muster, including advanced propulsion technologies such as solar-electric engines and perhaps even nuclear rockets, according to NASA Administrator Charlie Bolden, who wants to slash the travel time required to send astronauts to Mars. [Full Story: NASA Chief Wants to Cut Mars Travel Time in Half]

A NASA spacecraft's path to Pluto this summer should be relatively smooth and safe, a new and improved portrait of the dwarf planet's moons suggests. [Full Story: Pluto Probe Should Have Clear Sailing Amid Tiny Moons]

The May 29 statement by Roscosmos on the May 16 Proton rocket failure confirmed initial suspicions of a third-stage engine issue but otherwise left many questions unanswered about the failure's origin. [Full Story: Russian Statement on Proton Failure Leaves Questions]