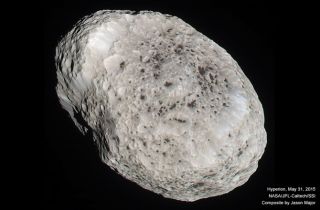 On Sunday, May 31, 2015, NASA's Cassini spacecraft made its latest and final flyby of Hyperion, Saturn's spongy moon. At around 9:36 a.m. EDT Cassini came within 21,000 miles (34,000 km) of Hyperion's surface — not its closest approach ever but certainly close enough to grab some fantastic images of this porous and punched-in world.

The image above is a color composite made from images acquired in optical wavelengths (i.e., Cassini's red, green, and blue color filters) with some contrast enhancement and a bit of color saturation boosting as well. This is about what Hyperion would look like to an astronaut's eyes, if she happened to have been riding along with Cassini last Sunday.

At 255 x 163 x 137 miles (410 x 262 x 220 kilometers), Hyperion is the largest of Saturn's irregularly-shaped moons and its eighth-largest overall. Scientists think it could be what's left over from a larger moon that was blown apart in the distant past. [Spectacular Color Maps of Saturn's Moons by Cassini]

Because of its porosity and low density, impacts on Hyperion tend to create punched-in craters with little to no ejecta, giving it its strange spongelike appearance.

PHOTOS: The Moons of Saturn

Discovered in 1848 Hyperion is four times as far from Saturn as our moon is from us yet completes an orbit every 21 days, getting gravitational tugs and nudges from its inner neighbor Titan as it passes.

In fact some of Hyperion's reddish coloration may come from Titan, as hydrocarbons from its atmosphere get blown into orbit by the solar wind and eventually fall on Hyperion, where they concentrate in low spots and impact craters.

Cassini will not come this close to Hyperion again for the remainder of its mission, which will come to an end in September 2017 when it makes a final dive between the rings and down into Saturn's atmosphere.