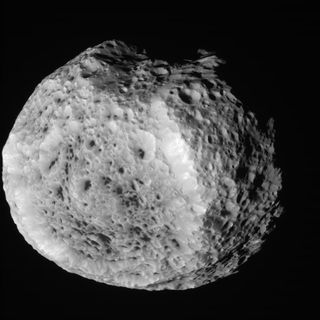 The pictures come from Cassini's Aug. 25 flyby of the Saturn moon Hyperion. The pass, the spacecraft's second closest encounter with the moon, brought Cassini within about 15,500 miles (25,000 kilometers) of Hyperion’s surface.

Of all Saturn’s 62 moons, Hyperion is one of the strangest. It is an ungainly, misshapen space rock hurtling on a chaotic orbit around the ringed giant. [See the photos of Saturn's moon Hyperion]

The moon is small — only about 168 miles (270 kilometers) across — and has an irregular shape and surface appearance. As it tumbles along in orbit, the moon rotates unpredictably, preventing scientists from predicting in advance exactly what terrain the spacecraft's cameras would image during this flyby.

The images should help researchers improve color measurements of the moon and determine how the moon's brightness changes as lighting and viewing conditions change, which can provide insight into the texture of the surface. The color measurements provide additional information about different materials on the moon's deeply pitted surface.

This isn't the first time Cassini has snapped close-up photos of the Saturn moon.

Cassini's closest encounter with Hyperion was on September 26, 2005, when the spacecraft flew approximately 310 miles (500 kilometers) above the moon's surface.

NASA's Cassini spacecraft launched in 1997 on a mission to study Saturn, the solar system's second largest planet. The probe arrived in orbit around the planet in 2004, and is expected to continue taking observations through at least 2017.