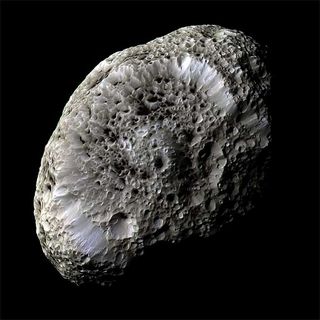 View of Hyperion revealing details across its surface, obtained during Cassini's flyby in Sept 2005. It is made up of a combination of images taken using infrared, green and ultraviolet spectral filters.
(Image: © NASA/JPL/Space Science Institute)

One of the strangest moons in our solar system is Hyperion, a Saturnian satellite so pockmarked by deep craters that it looks like a giant, rotating bath sponge adrift in space.

New image analyses suggest the moon’s odd appearance is the result of a highly porous surface that preserves craters, allowing them to remain nearly as pristine as the day they were created.

The finding is just one of several new details about the quirky moon revealed in two studies published in the July 5 issue of the journal Nature. Scientists determined that Hyperion is composed mostly of water ice and that the bottoms of its craters are covered in a dark red gunk that could be the key to resolving some of the moon’s other strange properties.

Hyperion is all kinds of weird. It is one of the largest non-spherical bodies in the solar system. The moon is oval shaped and about 250 miles (400 km) at its widest point.  Unlike most of Saturn’s other satellites, it is not tidally locked to the ringed-planet. Earth's moon is tidally locked, which is why we always see the same face of it. Instead, Hyperion undergoes “chaotic rotation,” meaning its axis of rotation shifts so much that scientists can’t reliably predict its orientation in space.

Perhaps the most striking thing about Hyperion, however, is its extremely pitted appearance. Hundreds of craters cover the surface, with most averaging 1 to 6 miles (2 to 10 kilometers) wide.

The latest analyses of data obtained by NASA’s Cassini spacecraft during its flybys of Hyperion in 2005 and 2006 show that about 40 percent of the moon is empty space.

Hyperion’s high porosity could explain its sponge-like appearance, scientists say. A large meteor striking Earth’s moon will gouge a deep hole on the surface and send up a giant spray of rock and dust. The excavated material rains back down onto the lunar surface and into other craters, partially filling them in. In contrast, the surface of Hyperion is so brittle that an object striking it will create a hole but not send any material flying. Surrounding craters remain as deep as when they first formed.

“Theoretical work suggests that if you have a porous target, craters may be more compressional instead of being explosive and tossing stuff out,” said Peter Thomas of Cornell University, who led one of the studies.

The new analyses also confirmed that Hyperion is composed mostly of water ice with very little rock. “We find that water ice is the main constituent of the surface, but it’s dirty water ice,” said Dale Cruickshank, a researcher at NASA Ames Research Center who led the second study. “Fresh water ice would look very bright in reflected sunlight, but this is definitely dingy.”

Cruickshank’s team attributes the moon’s dinginess to contamination by a dark, organic material that litters Hyperion’s surface and is concentrated in several of its craters.

The reddish gunk contains long chains of carbon and hydrogen and appears very similar to material found on other Saturnian satellites, most notably Iaeptus.

The third-largest moon of Saturn, Iaeptus is an unusual two-toned world with one half covered in gleaming ice and the other half coated in the same mysterious dark material that covers Hyperion.

This link has some scientists speculating that Hyperion’s strange shape and Iaeptus’ odd paint job share a common origin. “Maybe Hyperion got hit and is the origin of this dark stuff which then got spewed out and got swept up by Iapetus,” Cruickshank told SPACE.com.

According to this idea, a giant object collided with a still-round Hyperion in the distant past. The impact sent Hyperion into a cosmic spin that it is still reeling from today and caused a shower of dust-like particles to fly outwards through space, where it struck an unaware Iapetus full in the face.

“That’s not completely implausible,” Cruickshank said. If Iapetus “ran into a dust storm as it orbited around Saturn, the dust would be distributed the way we see it.”

As to what the object might have been that struck Hyperion, Cruickshank notes that the same reddish gunk can also be found on other icy objects in the outer solar system, including other moons, Kuiper belt objects and comets.