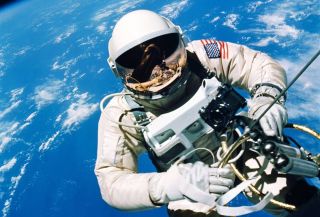 Astronaut Ed White floats in the microgravity of space outside the Gemini IV spacecraft. Behind him is the brilliant blue Earth and its white cloud cover. White is wearing a specially-designed space suit. The visor of the helmet is gold plated to protect him against the unfiltered rays of the sun. In his left hand is a Hand-Held Self-Maneuvering Unit with which he controls his movements in space.
(Image: © NASA/Jim McDivitt)

The United States first stepped out into the void of space 50 years ago today (June 3).

On June 3, 1965, NASA astronaut Ed White left the safety of his Gemini 4 spacecraft equipped with a spacesuit, a tether and a small gas gun for maneuvering. Video of that first American spacewalk shows White enjoying the excursion, even as he made spaceflight history.

For about 23 minutes, White floated near the spacecraft with Earth backdropped behind him. His tumbling movements — captured in photos by his commander, Jim McDivitt — are still widely published today. White has described his return to the spacecraft as one of the saddest moments of his life. [The First American Spacewalk in Photos]

Hundreds of spacewalks (also known as extravehicular activities, or EVAs) have been done since White's time. While the first NASA EVA — which came just three months after the world's first spacewalk, performed by cosmonaut Alexei Leonov — was brief, with no major tasks accomplished aside from getting used to the sensation, it marked a change in the thinking for space work, historian Jennifer Levasseur told Space.com.

"There is a turning point between learning how to do things and actually starting to carry out some of the activities we know are going to be required to perform tasks in space," said Levasseur, a museum specialist at the Smithsonian National Air and Space Museum in Washington, D.C. [Video: Astronaut Recounts 50 Years of Spacewalks]

Specifically, White's spacewalk previewed challenges that the Gemini program would later have to overcome, Levasseur said. Fogging in White's visor pointed to problems with the spacesuit overheating. His difficulties in maneuvering, combined with reports from other astronauts, eventually prompted NASA to install more handrails and anchor points on spacecraft.

Parts of White's spacesuit, such as his helmet and gloves, are on display at a temporary museum exhibit Levasseur is curating, called "Outside the Spacecraft: 50 Years of Extra-Vehicular Activity." The exhibit closes Monday (June 8).

EVAs were considered necessary in the 1960s just in case a spaceship docking failed, said Robert Pearlman, the founder of space history site (and Space.com partner) collectSPACE.com. For example, spacewalking to the other vehicle was one of many backup procedures for an Apollo lunar lander returning to its orbiting mate after a moon mission.

But in some ways, Pearlman pointed out, White's spacewalk made things look too easy. Later Gemini EVAs were designed with the assumption that astronauts could move without challenges, but as tasks were added, several spacewalkers had difficulty holding on to the spacecraft to do their work. [The Evolution of the Spacesuit in Photos]

"In the large sense of history," Pearlman said, "spacewalking became much more important after Apollo. It literally saved the Skylab space station."

The orbiting station Skylab was launched in May 1973 with the goal of serving as the first U.S. platform for long-duration missions. However, vibrations during launch caused a part of the space station to rip apart, destroying two solar panels and stopping a third from deploying. The first crew to Skylab ended up repairing the station to make it functional.

"Had we not been able to perform spacewalks and do them reliably, then there would have been no way to repair the station from the damages, and that entire program would have been a loss," Pearlman said.

While this practice ceased due to safety concerns following the Challenger shuttle explosion in 1986, spacewalking still was key to how space exploration developed. Among other milestones, astronauts performed EVAs to repair and upgrade NASA's Hubble Space Telescope, as well as construct and repair the International Space Station.

For example, cameras were included on the Russian Orlan suit after that country saw how Americans monitored astronaut activities in real time. Later, the United States began using GoPro cameras after seeing how much the Russians liked doing so.

With the United States now working to get astronauts to an asteroid and Mars, changes to spacewalking techniques and spacesuits will be needed, both Levasseur and Pearlman said.

For example, artificial handholds or ways of attaching to an asteroid may be required since, unlike a station, space rocks don't come equipped with built-in spots for tethers. And if an astronaut plans to walk on Mars in the same spacesuit as that used during a free-floating spacewalk, the suit will need to have better joint flexibility.