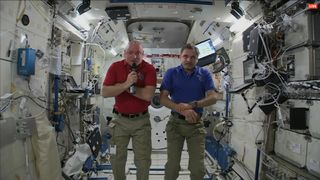 A robotic Russian cargo spacecraft won't make it to the International Space Station as planned this week, but astronauts aboard the orbiting lab say the failure is not the end of the world.

Russia's unmanned Progress 59 space freighter suffered a serious malfunction shortly after launching on Tuesday (April 28) and will plunge to its death in Earth's atmosphere in the coming days. The spacecraft is carrying more than 3 tons of supplies for the crewmembers aboard the orbiting lab, but none of this cargo is absolutely critical, said Russian cosmonaut Mikhail Kornienko.

"We are 100 percent confident that we will be living and working productively onboard the space station up until the time that the next cargo vehicle is going to come," Kornienko told reporters in a video interview Wednesday (April 29). "And we don't have any problems; we have outstanding psychological support, and everything is fine with the exception of [the] Progress situation." [How Russia's Progress Spaceships Work (Infographic)]

Kornienko is one of the six crewmembers who make up the space station's current Expedition 43. He and NASA astronaut Scott Kelly are one month into an unprecedented yearlong mission that's designed to help pave the way for journeys to Mars and other deep-space destinations.

"We have a lot of redundancy onboard the space station. The program plans for these kind of things to happen. They're very unfortunate when they do, but we do have supplies on board," Kelly told reporters Wednesday.

Indeed, a Dragon is currently berthed to the orbiting lab, having arrived earlier this month. Another Dragon is scheduled to launch toward the station on June 19, and an HTV mission is slated to blast off on Aug. 17. The next Cygnus mission will launch late this year. (The previous Cygnus flight ended just seconds after liftoff in October 2014, when Orbital's Antares rocket exploded. The company is currently revamping Antares and will use United Launch Alliance's Atlas V rocket for the next Cygnus mission.)

"Long-term impact, both programs are looking at that right now," Kelly said, referring to NASA and the Russian space agency, known as Roscosmos. "But I think we're going to be in good shape."

SpaceX holds a $1.6 billion deal with NASA to fly at least 12 resupply missions to the station using Dragon and its Falcon 9 rocket. The company is midway through mission number six; all of the flights have been successful thus far.