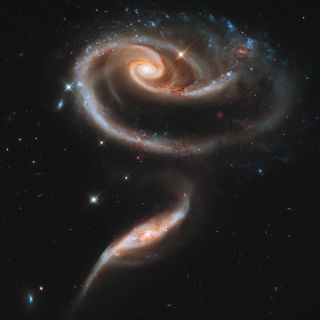 Two interacting galaxies (UGC 1810 on top and UGC 1813 below) that are together known as Arp 273, were captured by the Hubble Space Telescope.
(Image: © NASA, ESA, and the Hubble Heritage Team (STScI/AURA))

This week, NASA and the space science community celebrated 25 years since the launch and deployment of the Hubble Space Telescope, an instrument with one of the greatest redemption stories in science history.

Throughout its quarter-century in space, the iconic telescope — which launched on April 24, 1990 — has provided spectacular views of the cosmos and revealed exceptional insights about the universe. But there were also moments when it looked as though decades of work, plus billions of taxpayer dollars, might suddenly slip down the drain, and there were worries that the project might fail completely.

But Hubble overcame those obstacles to become one of the most successful telescopes ever built, both in terms of its scientific return and its impact on the public. And after 25 years of operation, Hubble's best days may still be ahead of it, astronomers say. [The Hubble Space Telescope: A 25th Anniversary Photo Celebration]

On Thursday (April 23), NASA unveiled its official anniversary image for the Hubble 25-year celebration. It's a cosmic landscape featuring multicolored gas clouds and dazzling, jewel-like stars — a breathtaking image of a region in space that can teach astronomers about how star clusters form in the universe. When it comes to this equation of beauty plus science, there really isn't another scientific instrument on Earth, or in orbit, that can compete with the Hubble telescope.

"Even the most optimistic person to whom you could have spoken back in 1990 couldn't have predicted the degree to which Hubble would rewrite our astrophysics and planetary science textbooks," NASA Administrator Charles Bolden said at the image-unveiling event. "A quarter-century later, Hubble has fundamentally changed our understanding of our universe, and our place in it."

At its current pace, the Hubble telescope produces 10TB of new data per year — enough to fill the entire collection of the Library of Congress, Bolden said. At that same event, Kathy Flanagan, interim director of the Space Telescope Science Institute in Baltimore, which operates Hubble's science program, said scientists using data from the telescope have produced "nearly 13,000" science papers.

This week, NASA hosted a Hubble symposium to discuss major science results from the telescope. The space agency also has hosted Hubble-themed events for the press and the general public, as well as a Friday night (April 24) gala to honor many of the people who made Hubble what it is today. Few, if any other, NASA projects have garnered such an ovation.

The climb to success

The Hubble telescope climbed to its current position at the peak of accomplishment from some deep valleys of near-failure.

In his book, "The Universe a Mirror: The Saga of the Hubble Space Telescope and the Visionaries Who Built it," (Princeton University Press, 2008), science writer Robert Zimmerman chronicled the decades-long slog to get the Hubble telescope to where it is today. First, there was the chore of convincing the astronomy community to agree to invest in such a costly project, and then to get Congress to fund it, and to keep funding it during construction. It wasn't just the telescope that suffered during those years; Zimmerman also wrote about people who dedicated themselves to Hubble at the expense of their careers or even their personal lives.

The Hubble Space Telescope was originally scheduled to blast off in 1983 but didn't get off the ground until 1990. Shortly after the telescope's launch, the scientific team realized the images they were receiving were blurry. It turned out that the telescope's mirror was ground ever so slightly to the wrong thickness. (The flaw arose because of a mistake with the testing equipment used during the mirror's construction.)

In 1993, the first Hubble servicing mission installed hardware that could adjust for the flaw in the mirror, and the telescope quickly blossomed to its full potential. It revealed new information at every size scale, from the solar system to the entire observable universe. Hubble has found four new moons around Pluto, demonstrated that galaxies frequently collide and merge together, drastically improved measurements of the age of the universe, and showed that space is not only expanding but spreading out faster and faster.

By 2003, Hubble had provided more than a decade of valuable science and beautiful images. At that point, it could have retired and still been labeled a success. But plans were in the works to add two new instruments to Hubble and repair two instruments that had stopped working. [Photos: NASA's Hubble Space Telescope Servicing Missions]

The fifth and thus-far final crewed repair mission to Hubble took place in 2009. That mission is a microcosm of Hubble's life story: full of close calls that nearly spelled disaster for the telescope, like when a bolt holding down a handrail wouldn't come loose and nearly prevented the astronauts from getting to one of the instruments that needed fixing.

In the end, the mission was a complete success. The astronauts installed two new instruments, fixed two broken instruments, and installed new batteries, new gyroscopes and a new scientific computer, to prolong Hubble's life. Today, it continues to be one of the most powerful, most in-demand telescopes in the world.

What the future holds

So, what's next for the Hubble Space Telescope?

"Frankly, we never even thought that the telescope would last this long," Bolden said at the image-unveiling event. "The original plan for Hubble, we were told, was maybe 15 years. The fact that we are still going strong a quarter-century later is thanks to the Hubble heroes […] many of whom you will never know."

Hubble will stop taking data someday, but right now, NASA has no firm decommissioning date because the observatory is operating better than anyone expected more than five years after its last servicing. [Hubble Space Telescope: Kill Or Save It? (Video)]

Right now, the Hubble team members aim to keep the telescope running through at least 2020. If Hubble can reach that goal, it should overlap with NASA's James Webb Space Telescope, which is set to launch into space in 2018.

While the Hubble telescope sees mostly optical and ultraviolet light, the $8.8 billion James Webb Space Telescope sees infrared light, and it will peer even deeper into the universe than Hubble has. The James Webb telescope has a larger mirror — 21.3 feet (6.5 meters) wide, compared to Hubble's 7.9-foot (2.4 m) mirror — and will have a more powerful camera. And yet, it's hard to think how any future telescopes will fill the shoes Hubble leaves behind.

The Hubble telescope cannot maintain its orbit forever — if left alone, it will fall to Earth and be destroyed, likely in the mid- to late 2030s. NASA officials have said they won't let an uncontrolled re-entry happen, because people on the ground could be hurt by falling Hubble parts. So the agency has two options: Either steer Hubble to a safe destruction over the Pacific Ocean, or boost the telescope to a higher orbit (and possibly refurbish it one more time).

The time frame of Hubble's ultimate fate remains up in the air, because no one knows for sure how much longer Hubble will keep producing good science. (Zimmerman said he'll bet that if the Hubble telescope is still working when the time comes to capture it, NASA will find a way to put it back into a steady orbit.)

Twenty-five years after the Hubble Space Telescope's deployment, the iconic observatory's birthday celebration is not a memorial. Hubble is currently performing better than when it started, and shows no signs of slowing down. In fact, the telescope that has ascended to such great heights may not yet have reached the pinnacle of its accomplishments.