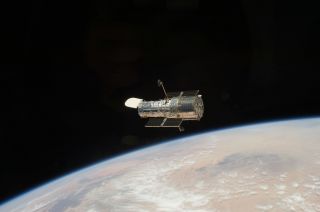 Hubble launched aboard the space shuttle Discovery on April 24, 1990, and has been capturing stunning views of the cosmos since astronauts fixed a flaw in the telescope's mirror during a 1993 servicing mission. The famous telescope has contributed to a number of revolutionary discoveries, including confirming that the universe's expansion is accelerating rather than slowing down and finding that supermassive black holes lurk at the heart of most, if not all galaxies.

Hubble's scientific legacy should continue to grow for years to come. The telescope's operators express confidence that the device will keep operating through at least 2020, and possibly even farther into the future, thanks in large part to the success of the five servicing missions astronauts performed between 1993 and 2009. [The Hubble Space Telescope: A 25th Anniversary Photo Celebration]

"The observatory's in excellent condition right now," Hubble Mission Office head Ken Sembach, of the Space Telescope Science Institute (STScI) in Baltimore, which operates the telescope's science program, told Space.com. "It's actually in better condition than we would have expected five years after a servicing mission."

"At the moment, at least — and I'm knocking on wood here — I don't see any showstopper any time soon, and hopefully there will be none," Livio told Space.com.

What could go wrong?

While Hubble is healthy now, the telescope — a joint project of NASA and the European Space Agency — is not immortal. Serious problems could conceivably crop up in a number of different Hubble systems, Sembach said.

"We might have trouble with the fine-guidance systems on board," he said. "We have three fine-guidance sensors. Their electronics are all original, so they're as old as the observatory itself."

These sensors remain in good condition, but they are being degraded by the relatively high radiation levels Hubble experiences in low-Earth orbit, Sembach added.

A substantial failure in Hubble's communications system is another realistic possibility, Sembach said, as is a problem with the observatory's orientation-maintaining reaction wheels.

"We have four reaction wheels on board, all of which are working well," he said. "But we need at least three of them to work. So if one were to fail, we would be only one failure away from halting operations."

Reaction-wheel problems have cropped up for another NASA space telescope, the planet-hunting Kepler spacecraft, which launched in March 2009. Kepler's original exoplanet search came to an end in May 2013, when the second of the observatory's four reaction wheels failed. (Kepler is now conducting a new mission called K2, which it is carrying out with just two healthy reaction wheels.)

"God forbid, if one of those computer interfaces that controls all the instruments fails, then the whole thing could fail," he said. "But hopefully that will not happen." [Inside Hubble's Universe (Video Show)]

More than just hope is keeping such potential issues at bay. Hubble is a robust machine with many built-in redundancies, and its operators have drawn up a number of contingency plans over the telescope's long life, Sembach said.

"We have contigency plans in place for power, for communications, for attitude control, for gyroscopes, for instruments, for computers, for just about anything you can think of," he said.

Hubble team members aim to keep the telescope going through at least 2020, so its operations will overlap with those of NASA's $8.8 billion James Webb Space Telescope (JWST), which is due to launch in 2018. JWST is optimized to view the cosmos in infrared light, while Hubble sees more in the visible and ultraviolet wavelengths.

Using both space telescopes in tandem "really gives you a more panchromatic view of the universe than you would get just from Hubble alone, or just from Webb alone," Sembach said.

Going up or going down?

The Hubble Space Telescope circles Earth at an altitude of 353 miles (568 kilometers), but its orbit decays over time due to atmospheric drag. This means that a decision looms for NASA, regardless of how long the telescope continues to be healthy and scientifically productive.

The space agency will have to either "de-orbit" Hubble in a controlled fashion, sending the hallowed observatory to its doom over the Pacific Ocean, or boost it to a higher orbit that will keep Hubble aloft for decades to come.

Doing nothing, and allowing Hubble to come crashing back to Earth uncontrolled, is not a viable option, said John Grunsfeld, associate administrator for NASA's Science Mission Directorate.

In an uncontolled entry, "Hubble will start tumbling, and we don't know where it will go," Grunseld, a former astronaut who serviced Hubble during three different space shuttle missions, said in a new NASA video about Hubble's fate. "So, if that hits somebody and kills them, then the ending is not a good story."

Both choices, de-orbit or boost, would require a mission to Hubble, Sembach said. This raises the intriguing possibility of a third option that could keep the observatory going for even longer.

"If you're putting it into a higher orbit, the question at that point is, do you also refurbish it?" Sembach said. "You can imagine variations on these themes."

A Hubble de-orbiting mission would be unmanned, while a refurbishing/boosting effort could conceivably be manned or robotic, he added.

There's still time to figure all this out: The worst-case scenario envisions Hubble crashing back to Earth in 2028, and most models suggest an uncontrolled re-entry wouldn't happen until the mid-2030s, Sembach said.

"Maybe around the 2020 time frame, we'll have to start really thinking about what it is that we want to do," he said. "That's probably a good time, given that we'll have had five more years of Hubble operations under our belt, Webb will be up there and we'll be looking at the universe in a different way than we're looking at it today."