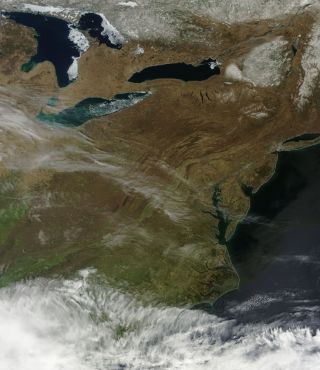 NASA's Earth-observing Aqua satellite captured the look of spring blooming on the east coast of the United States in 2015.
(Image: © NASA)

NASA's Earth observing Aqua satellite often captures stunning views as it orbits the Earth -- and some troubling ones like California's record-low snowpack.

Recently the satellite, like a camera-toting tourist, was in position to take a snapshot as spring colors transform the look of the East Coast. You can see snow in the mountains of upstate New York while the mid-Atlantic states are going green.

The satellite, launched in 2002, carries six instruments to measure the planet's water cycle. More of Aqua's Earth-orbiting highlights can be viewed here.