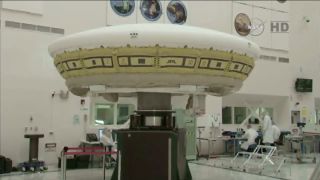 NASA put some new Mars-landing tech through its paces Tuesday to help prep for a flight test from Hawaii this June.

Engineers subjected the saucer-shaped Low-Density Supersonic Decelerator (LDSD) test vehicle, which is part of a project designed to help get heavy payloads down safely on Mars, to a "spin table" test Tuesday (March 31) at NASA's Jet Propulsion Laboratory (JPL) in Pasadena, California.

The main goal was to look for any wobbles caused by an imperfect distribution of mass throughout the 15-foot-wide (4.6 meters), 7,000-lb. (3,175 kilograms) LDSD vehicle, project team members said. If such wobbles are found, they can be corrected by inserting small masses at appropriate points around the craft's rim. [NASA's Inflatable Flying Saucer for Mars Landings (Photos)]

"This is like spinning your automobile tire, and putting weights on it to make sure that it spins perfectly," LDSD Chief Engineer Rob Manning, of JPL, said during today's event, which was broadcast live on NASA TV.

The SIADs are designed to fit around the rim of an entry vehicle. They will inflate as the craft screams through the atmosphere of its target planet, increasing surface area and drag, and thus slowing down the vehicle.

NASA officials hope such technology can increase the size of the payloads the agency can put down on Mars. The "sky crane" system that landed Curiosity in August 2012 can handle about 1 metric ton — far short of the 10 to 20 metric tons (about 11 to 22 tons) that will likely be required for manned exploration of the Red Planet, officials said.

"You can think of this as a stepping stone," Reuther said. "Certainly, we have to take this step before we eventually get to a capability that can put 10 or more metric tons to the surface of Mars."

The LDSD vehicle, which incorporates a 20-foot-wide (6 m) SIAD as well as the big chute, is in final preparations for shipment to Hawaii, where it will undergo the program's second-ever flight test from the U.S. Navy's Pacific Missile Range Facility on the island of Kauai between June 2 and June 12, weather permitting.

During the first LDSD flight test, which took place last June from the same Kauai facility, a huge balloon carried a test vehicle up to an altitude of 23 miles (37 kilometers). The balloon then dropped the craft, whose onboard rocket motor kicked on and boosted it to Mach 4 (four times the speed of sound) and an altitude of 34 miles (55 km).

The air in those high altitudes is a good analog for the Martian atmosphere, which is just 1 percent as thick as that of Earth at sea level, project team members say.

Things went pretty much perfectly until it was time for the parachute, which tore almost immediately upon deployment. The team has changed the chute's design for the upcoming flight test, strengthening some elements and modifying its shape.

"We believe this parachute is a lot stronger than the parachute we tested last summer," Manning said. "The question is, will it be strong enough?"