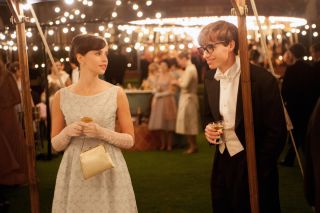 Eddie Redmayne and Felicity Jones in the Stephen Hawking biopic "The Theory of Everything," which was nominated for five Academy Awards.
(Image: © Focus Features)

Oscar night will hold a fair bit of drama for space fans this year.

Two space-themed movies — Christopher Nolan's sci-fi epic "Interstellar" and the Stephen Hawking biopic "The Theory of Everything" — are up for a total of 10 Academy Awards, which will be announced Sunday night (Feb. 22).

"Interstellar," which follows the quest of a small band of explorers to find a new planet for humanity to call home, garnered nods for best original score, production design, sound editing, sound mixing and visual effects.

"The Theory of Everything" isn't the only best picture nominee with some science chops. "The Imitation Game," which tells the story of brilliant English mathematician and computer scientist Alan Turing's work to crack the Nazis' Enigma code during World War II, also got a nod.

But the critical success of these two films — which together make up 25 percent of the best picture nominees — does not necessarily signal a great or increasing appreciation of science in society, said Katie McGill, a physics doctoral candidate at Cornell University.

"I think that these movies are about really interesting lives," McGill said Thursday (Feb. 19) during a "Science at the Oscars" Google+ Hangout that was hosted by the nonprofit Kavli Foundation. "They don't really get into the science as much."

Indeed, Hawking has battled through the crippling disease amyotrophic lateral sclerosis to become one of the most influential theoretical physicists since Albert Einstein. And Turing was gay during a time when engaging in "homosexual acts" could land you in prison in England. Despite his service to his country, Turing was prosecuted and eventually underwent chemical castration to avoid jail time.

Turing died of cyanide poisoning in 1954 at the age of 41. His death was ruled a suicide.