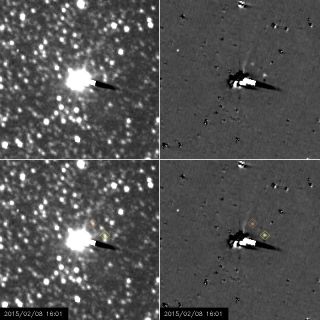 A NASA spacecraft speeding toward an epic flyby of Pluto on July 14 has beamed home its first good looks at two moons of the dwarf planet.

The New Horizons probe captured images of Nix and Hydra, two of Pluto's five known satellites, from Jan. 27 through Feb. 8, at distances ranging from 125 million miles to 115 million miles (201 million to 186 million kilometers), NASA officials said. The photos have been spliced together to create a short movie showing Nix and Hydra circling Pluto.

"It’s thrilling to watch the details of the Pluto system emerge as we close the distance to the spacecraft’s July 14 encounter," New Horizons science team member John Spencer, of the Southwest Research Institute in Boulder, Colorado, said in a statement. "This first good view of Nix and Hydra marks another major milestone, and a perfect way to celebrate the anniversary of Pluto’s discovery."

New Horizons team members discovered Nix and Hydra in 2005 using NASA's Hubble Space Telescope. Scientists think both moons are between 25 miles and 95 miles (40 to 153 km) wide; New Horizons should nail down their sizes when it zooms through the Pluto system this summer.

Two other Pluto moons, Styx and Kerberos, are smaller than Nix and Hydra, and are too faint to show up in the latest New Horizons images, NASA officials said. The dwarf planet's other known moon, Charon, blends into Pluto in the photos, creating a fuzzy white blob. (Charon is about 750 miles, or 1,207 km, in diameter — about half as wide as Pluto itself.)

The new photos were captured by New Horizons' Long-Range Reconnaissance Imager (LORRI), to help improve team members' understanding of the orbits of Nix and Hydra. The right-hand images have been processed to remove the Pluto-Charon glare and that of background stars, making Nix and Hydra easier to see, NASA officials said.

The streak extending to the right of Pluto and Charon is a result of overexposure, they added. (LORRI took the photos in a special mode that sacrifices resolution to boost sensitivity.)

The $700 million New Horizons mission launched in January 2006, tasked with lifting the veil on faraway, mysterious Pluto. On July 14, New Horizons will come within 8,500 miles (13,600 km) of the dwarf planet's surface.

That highly anticipated flyby may not mark the end of the probe's deep-space work. Mission team members want to send New Horizons on to explore a second body in the Kuiper Belt, the ring of icy objects beyond Neptune that Pluto calls home. If NASA funds this extended mission, the additional flyby would take place in 2019.