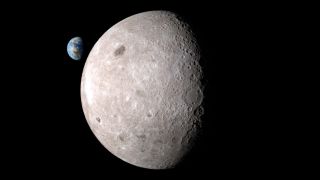 A new video from a NASA satellite orbiting the moon brings the phases of the far side of the lunar body into the light.

The phases of the moon — full moon, new moon, crescent and everything in between — also occur on the side facing away from Earth, according to data gathered by the NASA's Lunar Reconnaissance Orbiter (LRO). As the moon and the Earth move together around the sun, both sides of the planet's natural satellite experience phases of light and dark. You can watch the LRO video featuring lunar data and images.

The reason Earth only sees one side of the moon is that the two objects spin in a certain way relative to one another. The moon rotates as it orbits around the Earth, but its orbit and its rotation are matched, causing only one side to ever face the Earth — a phenomenon called tidal locking. [Moon Master: An Easy Quiz for Lunatics]

The LRO video was created at NASA's Scientific Visualization Studio at the Goddard Space Flight Center in Greenbelt, Maryland. Some of the footage used in the new video was taken by LRO with a telescopic lens, causing the Earth to appear larger than life behind the moon (this is also accomplished with computer software). Another view taken with wide-angle lens reduces the Earth's apparent size in the background.

Images of the far side of the moon also reveal its very different appearance compared to the side facing the Earth. Most notably, the far side has fewer dark splotches, called maria, which are pools of cooled lava. Maria are what create the familiar illusion of a "face" on the moon, leading to the fable of "the man in the moon."

The far side of the moon is heavily speckled with craters of many different sizes; It has even more craters than the near side. Scientists suspect that the lava that created the dark maria spots covered up many of the craters on the near side. The slightly darker region in the lower third of the far-side disk is part of the South Pole-Aitken basin, one of the largest and oldest impact features in the solar system, according to NASA.

The first images of the far side of the moon were captured by the Soviet probe Luna 3, in October 1959. The images captured by Luna 3 were of low quality, but provided the very first glimpse at the unseen side of the Earth's only satellite.

The $540 million LRO probe has returned hundreds of terabytes of data about the far side of the moon. In its first year alone, it delivered 192 terabytes of information, which is more data than is stored in all the printed materials in the Library of Congress.