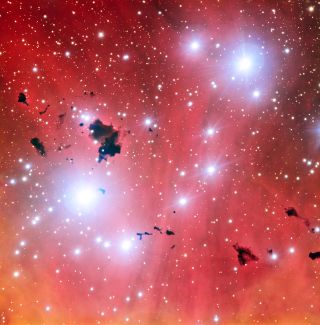 A view of the stellar nursery IC 2944 as seen from the European Southern Observatory's Very Large Telescope in Chile. A new study by European scientists suggests that gravity played a role in saving the infant universe from a collapse induced by the Higgs boson.
(Image: © ESO)

The recently discovered Higgs boson, which helps give particles their mass, could have destroyed the cosmos shortly after it was born, causing the universe to collapse just after the Big Bang. But gravity, the force that keeps planets and stars together, might have kept this from happening, scientists say.

In 2012, scientists confirmed the detection of the long-sought Higgs boson, also known by its nickname the "God particle," at the Large Hadron Collider (LHC), the most powerful particle accelerator on the planet. This particle helps give mass to all elementary particles that have mass, such as electrons and protons. Elementary particles that do not have mass, such as the photons that make up light, do not get mass from the Higgs boson.

The experiments that detected the Higgs boson revealed it had a mass of 125 billion electron-volts, or more than 130 times the mass of the proton. However, this discovery led to a mystery — at that mass, the Higgs boson should have destroyed the universe just after the Big Bang. [The Big Bang to Now in 10 Easy Steps]

This is because Higgs particles attract each other at high energies. For this to happen, the energies must be extraordinarily high, "at least a million times higher than the LHC can reach," study co-author Arttu Rajantie, a theoretical physicist at Imperial College London, told Space.com.

Right after the Big Bang, however, there was easily enough energy to make Higgs bosons attract each other. This could have led the early universe to contract instead of expand, snuffing it out shortly after its birth.

"The Standard Model of particle physics, which scientists use to explain elementary particles and their interactions, has so far not provided an answer to why the universe did not collapse following the Big Bang," Rajantie said in a statement.

A number of scientists had suggested that new laws of physics or as-yet-undiscovered particles might have stabilized the universe from the peril posed by the Higgs boson. Now Rajantie and his colleagues have found that gravity could solve this mystery instead.

Gravity is a consequence of masses warping the fabric of space and time. To imagine this, think of how bowling balls would deform rubber mats they sit on.

The early universe was very dense because it had not had a chance to expand much yet. This meant that space-time was greatly curved back then.

The researchers' calculations revealed that when space-time is greatly curved, the Higgs boson increases in mass. This would have also raised the amount of energy needed to make Higgs bosons attract each other, preventing any instability that might have collapsed the early universe.

Now that Rajantie and his colleagues have revealed that the interaction between gravity and the Higgs played a major role in the early universe, they want to learn more about the strength of this interaction. This could include looking at how the early universe developed using data from current and future European Space Agency missions that aim to measure the cosmic microwave background radiation, which constitute the echoes left over from the Big Bang, Rajantie said. It could also include studying gravitational waves, which are invisible ripples in the fabric of space-time given off by accelerating masses, he said.

The research is detailed in the Nov. 17 edition of the journal Physical Review Letters.