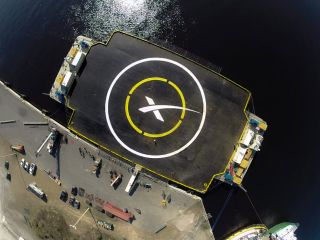 SpaceX will attempt one of the boldest maneuvers in the history of rocketry early Tuesday morning (Jan. 6) during a supply mission to the International Space Station for NASA, and you can watch the effort live online.

The California-based private spaceflight company will try to land the first stage of its Falcon 9 rocket on a floating platform in the Atlantic Ocean, shortly after the booster launches SpaceX's robotic Dragon cargo capsule from Cape Canaveral Air Force Station in Florida at 6:20 a.m. EST (1120 GMT) Tuesday. NASA officials have said there is a 60 percent chance of good launch weather for the planned launch. You can watch the SpaceX launch live on Space.com, courtesy of NASA TV, beginning at 5 a.m. EST (1000 GMT).

"The odds of success are not great — perhaps 50 percent at best," SpaceX representatives wrote of the platform landing in a mission update last month. "However, this test represents the first in a series of similar tests that will ultimately deliver a fully reusable Falcon 9 first stage." SpaceX will offer its own launch webcast on the company's website beginning at 6 a.m. EST (1100 GMT). [Reusable Rocket Launch Systems: How They Work (Infographic)]

Developing a fully and rapidly reusable rocket is a key priority for SpaceX and its billionaire founder, Elon Musk, who has said that such technology could cut the cost of spaceflight by a factor of 100.

SpaceX has made strides toward this ambitious goal already. For example, the company successfully brought a Falcon 9 first stage down for a soft ocean splashdown twice last year — once in April and again in July.

But Tuesday's test will be much more challenging. The drone ship measures just 300 feet long by 170 feet wide (91 by 52 meters) with its "wings" extended, and the 14-story-tall Falcon 9's leg span is about 70 feet (21 m), SpaceX representatives said.

Furthermore, although the drone ship will be equipped with position-stabilizing thrusters, it will not be anchored.

Three separate engine burns will help get the rocket stage on course and slow its speed from 2,900 mph (4,600 km/h) down to 4.5 mph (7.2 km/h) at the time of touchdown. The landing legs will deploy during the final burn, company representatives said. SpaceX has also outfitted the Falcon 9 stage with four independently steerable "hypersonic grid fins," which will be deployed upon atmospheric re-entry to aid in precision targeting.

As bold as Tuesday's test is, SpaceX has even more ambitious goals in mind for 2015.

"Over the next year, SpaceX has at least a dozen launches planned, with a number of additional testing opportunities," company representatives wrote. "Given what we know today, we believe it is quite likely that with one of those flights, we will not only be able to land a Falcon 9 first stage, but also re-fly."

The rocket-reusability test is a secondary objective on Tuesday; the main goal of the launch is to send Dragon on its way toward the space station with more than 5,000 lbs. (2,270 kilograms) of food, supplies and scientific experiments.

The launch will kick off the fifth of 12 robotic resupply missions to the orbiting lab that SpaceX plans to fly under a $1.6 billion NASA contract. All of the previous four missions have been successful.