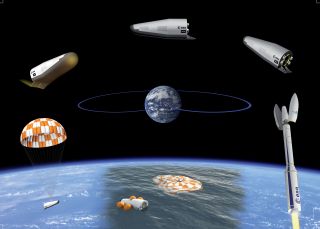 The European Space Agency is expected to launch a test flight of its reusable Intermediate eXperimental Vehicle in 2015.
(Image: © ESA-J. Huart, 2012)

Space fans have a lot to look forward to next year.

Closely watched spacecraft are expected to start pumping out science, while private spaceflight companies have a number of launches on the books for 2015. A Mars rover will celebrate its third anniversary chugging along on the Red Planet, and a Japanese spacecraft will have another chance to make it into orbit around Venus. Next year could also mark the return of Orbital Sciences Corp.'s Cygnus spacecraft to the International Space Station after a launch accident in October 2014.

Here are Space.com's major missions to keep an eye out for next year: [The Most Important Spaceflight Stories of 2014]

XCOR Aerospace and the Lynx space plane: Through 2015

XCOR Aerospace — the company building the Lynx space plane — has been making steady progress with the Lynx for the last few years. The plane is designed to take commercial customers and science payloads on flights to suborbital space. Lynx has room for one pilot and one passenger (as well as scientific experiments) on each flight, which reaches 330,000 feet (100 kilometers) into the air.

The private spaceflight company SpaceX is planning to land the first stage of a Falcon 9 rocket on a floating platform in the Atlantic Ocean no earlier than Jan. 6, after launching an uncrewed Dragon cargo capsule to the International Space Station. This will mark the first time anyone has ever attempted this kind of reusable rocket test, SpaceX representatives have said. SpaceX is also planning three more cargo launches in 2015 under a contract with NASA.

DSCOVR satellite launching to space: No earlier than Jan. 29

The Deep Space Climate Observatory (DSCOVR) is set for launch on SpaceX's Falcon 9 rocket on Jan. 23. The satellite is designed to monitor solar wind from about 900,000 miles (1.5 million kilometers) from Earth. The DSCOVR mission is a partnership among NOAA, NASA and the U.S. Air Force, and some version of the mission has been in process for more than 10 years.

Europe is due to launch a test flight of its reusable Intermediate eXperimental Vehicle (IXV) on Feb. 11. The spacecraft is designed to make it back through Earth's atmosphere safely after flying to space. The European Space Agency currently launches spacecraft to the International Space Station to deliver cargo; however, those robotic craft burn up harmlessly as they come back through Earth's atmosphere. The IXV could allow officials to bring experiments and other materials down from the space station safely. (SpaceX's Dragon capsule already offers this capability.)

NASA's MESSENGER mission — currently orbiting Mercury — is expected come to an end by about March with a planned impact into the closest planet to the sun. (The probe launched to space in 2004.) In December, MESSENGER mission scientists announced that while the orbiter is out of fuel, the team had found a way to use the probe's pressurant — used to pressurize fuel — to keep it in orbit longer, possibly up to another month. During its time orbiting Mercury, MESSENGER (short for MErcury Surface, Space ENvironment, GEochemistry and Ranging) has helped scientists snap pictures and craft the best map ever made of the planet. The long-lived spacecraft also helped NASA confirm that Mercury does harbor water ice. [Best Astronomy Stories of 2014]

NASA's Dawn probe — which orbited the giant asteroid Vesta from July 2011 to September 2012 — is expected to start circling another target, the dwarf planet Ceres, on March 6. The space agency wants to get an up-close view of Ceres partially because it is the biggest object in the asteroid belt between Mars and Jupiter. Some scientists even think Ceres could be a favorable place for life in the solar system.

NASA astronaut Scott Kelly and cosmonaut Mikhail Kornienko are scheduled to launch to the International Space Station for a one-year stay in space on March 27. This will mark the first time an American has ever spent a continuous year in space, and it is the first-ever mission of this length attempted on the space station. Usually missions to the orbiting outpost last about six months.

The Hubble Space Telescope is about to turn 25 years old. The giant telescope launched to space aboard the space shuttle Discovery in 1990. Hubble has gone through a variety of repairs, but it is still beaming back amazing views of the universe from space. Scientists are expecting it to continue functioning through at least 2018, when its successor, the James Webb Space Telescope is scheduled to launch.

The U.S. Air Force's secretive X-37B robotic space plane is expected to launch on its fourth mission sometime in May. The space plane recently came back from a nearly two-year mission, landing in California on Oct. 17, 2014, after launching to space in December 2012. It's still not clear what X-37B's missions are designed to do; information surrounding the vehicle's missions (including what it brings to orbit) is classified.

NASA's New Horizons spacecraft will make its much-anticipated flyby of the dwarf planet Pluto on July 14. The probe will start making observations of the relatively small cosmic body in January, but it will get its best look at Pluto during the flyby. The spacecraft launched toward Pluto's distant part of the solar system in 2006. Once it passes Pluto, the probe could fly by another frigid, faraway object during an extended mission (if NASA approves the plan).

The European Space Agency's Rosetta spacecraft will accompany Comet 67P/ Churyumov-Gerasimenko on its closest approach to the sun in August. Rosetta will monitor the way the comet changes as it gets closer to the star, beaming back unprecedented science as it goes. ESA officials are also hoping that the Philae lander, currently hibernating on Comet 67P/C-G, will wake up in the early months of 2015 and continue gathering data. The Rosetta mission marks the first time humans have ever put a spacecraft in orbit around a comet, and Philae is also the first probe to soft-land on a comet. [101 Amazing Photos Taken by Stargazers in 2014]

NASA's Curiosity rover will celebrate its third anniversary on the planet Mars on Aug. 5. The 1-ton robot has already discovered some incredible things about the Red Planet during its time on the Martian surface. Curiosity measured methane in Mars' atmosphere for the first time, a finding that could have implications for whether life existed (or still exists) on the planet. The rover will continue exploring the base of Mt. Sharp, its destination in Gale Crater, throughout 2015.

After missing its chance to enter into orbit around Venus in December 2010, Japan's Akatsuki spacecraft will have another chance to make it into orbit around the planet in November. The spacecraft missed its first orbital opportunity when a key main-engine burn failed, but Japanese officials might be able to get it into orbit in 2015 by using the probe's smaller thrusters to do the job. Akatsuki launched to space with the Ikaros solar sail, which was the first successful demonstration of solar sail technology in space.

The private spaceflight company Orbital Sciences Corp. has purchased space aboard United Launch Alliance's Atlas V rocket to fly Orbital's robotic Cygnus spacecraft to the International Space Station in 2015 after a rocket accident in October 2014. Cygnus cargo craft usually launch to the station via Orbital's Antares rocket, but after an Antares carrying a Cygnus exploded just after liftoff, the rockets have been grounded by Orbital until upgrades can be made. The first Atlas 5-carrying Cygnus should launch in late 2015.

The European Space Agency's LISA Pathfinder mission — designed as a technology demonstration to detect ripples in space-time produced by the mergers of massive cosmic bodies — is expected to launch to space in 2015. If the probe does detect gravitational waves, it will be the first time a craft in space will have found evidence of these giant cosmic crashes.