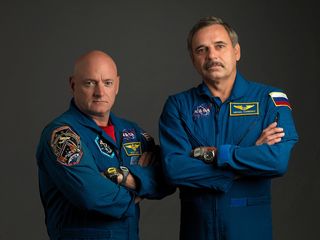 A NASA astronaut is getting ready to be the first American to spend a continuous year in space, and he is excited.

NASA's Scott Kelly will perform experiments to help the space agency learn more about how space changes the human body after he launches from the Baikonur Cosmodrome in Kazakhstan for his yearlong stay aboard the International Space Station on March 27, 2015. The long-duration mission could also be one of the first steps toward flying people to Mars in the future.

"What makes this exciting for me, this one-year flight is about the science and everything we're going to learn from expanding the envelope on the space station greater than what we've currently done," Kelly told members of the press during news conference hosted at UNESCO headquarters in Paris today (Dec. 18). "If we're ever going to go to Mars someday, the International Space Station is really a great platform to learn much more about having people live and work in space for longer durations." [Most Extreme Human Spaceflight Records]

Russian cosmonaut Mikhail Kornienko will join Kelly on the space station for the one-year mission. The two crewmembers consider themselves good friends now, and they expect to remain close throughout the mission, Kelly said.

"There are no borders in space," Kornienko said during the news conference. "It's a great example of how [countries] can work together, especially for politics on the ground."

This won't be Kelly's first spaceflight. Kelly and Kornienko have each flown to the space station for six-month missions before, and Kelly flew two short shuttle missions. Kornienko has spent a total of 176 days in space, and Kelly has spent 180 days in orbit.

While Kelly's flight will be the longest amount of time an American has spent in space, a few cosmonauts spent one year or more living on the space station Mir in the late 1980s and early 1990s.

NASA scientists have said that they hope to gather more data about how the human body changes during long spaceflights. This new information could help NASA officials understand more about the potential challenges astronauts could face during trips to and from Mars.

Astronauts will need to spend more than a year in space to get to Mars, work on the Red Planet and then return back to Earth. Therefore, NASA officials hope to use the International Space Station as a test bed for understanding how long spaceflights affect humans psychologically and physically.

Kelly said of the space station, "It's close to the Earth, and it's a great orbiting facility. This one-year flight is one of many stepping stones toward leaving low-Earth orbit again."

The astronaut will take part in a variety of experiments that will track the way his eyes, bones and other parts of his body change over the course of the year. Kelly's twin brother, astronaut Mark Kelly, will participate in some science experiments on the ground to assess Scott's physiological changes in space when compared to Mark's on Earth.

Kelly will monitor about 19 collaborative space station experiments on the human body for NASA. Officials from Roscosmos, the Russian space agency, have chosen 14 investigations. The cosmonaut and astronaut will join forces to participate in some of the chosen experiments, while the others are specific to NASA or Roscosmos, Kelly said.

"My excitement is for the science and what we're going to learn on this nearly one-year flight," Kelly said.