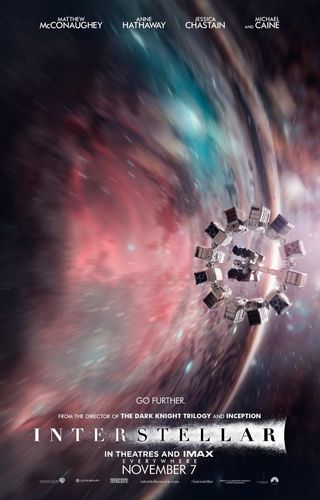 The team behind the stunning visual effects in the 2014 film "Interstellar" worked with renowned astrophysicist Kip Thorne to get their science right.
(Image: © Paramount Pictures)

LOS ANGELES — Paul Franklin and Kip Thorne worked hard to make science jump off the screen in the 2014 film "Interstellar."

As the movie's visual effects supervisor, Franklin oversaw the creation of the lavish and impressive visual effects of "Interstellar," which was released last month. Thorne is a top-drawer astrophysicist at Caltech, and an advisor to (and executive producer of) the movie.

The duo worked with a multitude of other dedicated folks to get the science and visual presentation of black holes, wormholes and other cosmic phenomena right — or as right as possible, given the narrative constraints of a sci-fi blockbuster. Franklin filled Space.com in on this complicated process. ['Interstellar': A Space Epic in Pictures]

When pre-production began for "Interstellar," director Chris Nolan told Franklin that he should meet as soon as possible with Kip Thorne.

"Kip was our scientific advisor and executive producer. I already knew about him because I am a big fan of those sorts of things, and he is one of the great astrophysicists of the modern era," Franklin told Space.com.

"Kip is a fantastic communicator, and he sat with me and went through space-time 101. He discussed what wormholes and black holes are, how gravity can warp space and affect time — things I had a bit of understanding about, but he really laid it out on the line for me," he added.

Thorne told Franklin that it would be nice if they could represent these cosmological wonders accurately, which Thorne said would be a first in a science fiction film.

How to create such things accurately without taking too much artistic license was a concern for Franklin. But science came to the rescue once again. [Images: Black Holes of the Universe]

"Kip got us the three-dimensional mathematics behind these things, and we were able to turn this into software that could accurately calculate all the light-ray paths around these objects, to show how they distort space and create these vast gravitational lenses," Franklin said.

It was a remarkable advance in visual effects, he added, and it created images that not only wowed audiences globally, but were also the first true high-resolution moving views of such astronomical wonders.

"We found that the academic world never had pushed [the resolution] this high before, because they didn't need to," Franklin recalled. "It's a first."

But to explore these deep-space vistas would require getting the characters into space first. With the script set in a not-too-distant future, Franklin and his team would need to blend familiar technology (rockets) with futuristic ideas (high-tech shuttles).

As Franklin explained, "We wanted to ground the cinematography in the language of the Apollo and Gemini missions, a very reality-based look of space exploration. We could have done it digitally, which is very sophisticated these days, but people can still detect the difference between something that is physical and real and photographed, and something that has been digitally generated." [The Spaceships of 'Interstellar' Explained (Infographic)]

This explains two interesting choices in "Interstellar" — first, the launch vehicle for leaving Earth. Yes, that was a trusty Saturn V rocket you saw leaving the launch silo in the film. Franklin said that the retired Apollo moon rocket was chosen for its familiarity to the viewer — and for another reason: "We wanted an iconic image of that big rocket taking off, that cascade of frozen condensation falling away … by recreating those classic, well-known angles."

But there was more at work in the choice of a Saturn V as well, Franklin said.

"The idea I had was that this is the last gasp of the space program, the last best hope for us to go and find someplace else to live. So they are using whatever they have got to accomplish this," he said. "The implication is that the whole mission has been put together from what is available. So I had this backstory that the Saturn V that you see being launched has actually been taken from the museum in Florida. They refurbished it and launched it … I think that's entirely plausible. After all, the new SLS [NASA's Space Launch System megarocket] incorporates elements of Apollo technology. So I didn't think that was too far-fetched. And you'd need a big heavy-lift vehicle to get those two chunky Rangers up into space."

But if it took a reconditioned Saturn V to get away from Earth, how about those single-stage-to-orbit shuttles the film's pioneering astronauts (led by Cooper, a former farmer played by Matthew McConaughey) used to reach the exoplanets?

"The engines are imagined to be something plasma electric, a super-advanced version of the ion engines already being used in space exploration," Franklin said. "But of course, these [film engines] produce much, much higher levels of thrust than the ion engines of today. So the engine pods would have some kind of compact tokamak [nuclear] fusion generator for power, that sort of thing."

He also mentioned that the Saturn V was launching not only the mass of the Rangers, but also the mass of the supplies needed at the crew's mothership, Endurance. So the huge rocket had to lift much more mass than did the Ranger shuttles going to and from the exoplanets.

Speaking of those future spacecraft, they were unique in another, more prosaic way. While the Saturn V launch was digitally created, most of the major effects in "Interstellar," including shots of the Ranger shuttles and Endurance, were not digital. For the first time in a long while, a major movie used miniatures — models — just like sci-fi classics did through the 1990s.

"We built very large sets and props for the spacecraft, which we used on location in Iceland," Franklin explained. "Then we brought those props back to Los Angeles and put them on a motion base and shot them on the stage."

The team decided to use models because they can look more realistic onscreen than digitally created spaceships, Franklin said.

"We went with miniatures because we were keen to get a sense of tactile reality," he said. "Also, by using cameras, you get the proper relationships between exposure, shadows [and] the way light moves across an object when shadows cross it … this results in an inherent reality, which we thought was very important."

But reality-based models also mean real stage sizes, and the "miniatures" in "Interstellar" were not exactly small. For example, the Endurance, the spinning ship that made the voyage through the wormhole and beyond, was one-fifteenth scale, or about 25 feet (7.6 meters) across. For comparison, the Enterprise 1701-A from several of the "Star Trek" films was considered large at about 8 feet (2.4 m) long.

To infinity … and beyond

But the use of real sets and miniatures didn't end there. When it came time for Cooper to enter the 5th-dimensional version of his daughter Murph's bedroom, things got really complex. [Warning: Spoilers ahead.]

Franklin admitted to early concerns about the "library" area, the 5th-dimensional gateway that Cooper explores to make contact with his daughter near the end of the film.

"The discussions about that area, which we called the tesseract, started right at the beginning of pre-production," he said. "This tesseract allows Cooper to see time as a physical dimension. All the timelines inside Murph's bedroom are presented as physical objects, which Cooper can interact with. He can navigate along the timeline." [The Science of 'Interstellar' Explained (Infographic)]

Franklin continued: "We spent a lot of time thinking about Einstein's theory of world lines. Each object in the universe is leaving a world line behind it — a trace of matter in space-time. So we wanted to make these things visible inside the tesseract. Cooper could interact with them … that is how he sent messages to Murph via the books falling off the shelf, or later on when he starts moving the hand on the watch."

After a lot of consideration, the effects team decided to stay old school. "We didn't use a single bit of green screen in that entire sequence!" Franklin said. In fact, he and his colleagues even used slit-scan photography, a technique made famous in Stanly Kubrick's "2001: A Space Odyssey."

"I started looking at slit-scan photography. It was part of the stargate sequence in 2001," Franklin said. With slit-scan, you allow the image to move past a slit-shaped shutter held open for longer-than-normal exposures.

"What you get," Franklin explained, "is a photograph that captures one point in space across many moments in time, as opposed to a regular photograph, which is one point in time across many points in space. This immediately spoke to the idea of an object standing still, leaving its trace through time."

The results are stunning, with smears of Murph's bedroom vibrating off into infinity in a complex, rectilinear form.

"The art department did a great job of turning this stuff that I thought would be impossible to build into an actual physical structure, something that you could see," Franklin added. "That set was about 60 feet [18.3 m] on each side, and maybe 40 feet [12.2 m] tall."

The final result, as millions are now aware, was an effects sequence that excelled not just visually but emotionally as well. And that's what everyone behind the production of the film was after.

When asked what allowed him to make visuals in this film that outdid so many other efforts, Franklin smiled and said, "I just work with very intelligent people who make me look smart."

Since that is a group that includes Kip Thorne, it makes sense to take Franklin at his word.