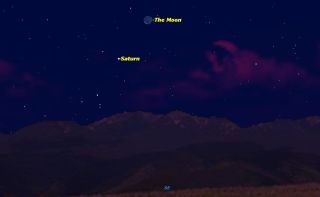 Saturn reappears from behind the Sun in the dawn sky, and on Friday morning, December 19, lies just below the waning crescent Moon in the southeast.
(Image: © Starry Night Software)

This week the celestial clock marks two milestones: Saturn's move into the morning sky and the winter solstice.

For the last few months, the planet Saturn has been sinking slowly towards the sun in the evening sky. It reached conjunction with the sun on Nov. 18, putting it on the far side of the sun from Earth. A month later it is now peeking out on the morning side of the sun.

Lost in the rising sun's glow until a few days ago, Saturn now can be seen low in the southeast an hour before sunrise. As the moon moves around the Earth, it will be close to Saturn on the morning of Friday (Dec. 19). The two will make a pretty pair in the dawn sky. [Saturn's Glorious Rings (Photos)]

If you try to get an early look at Saturn with a telescope, you'll see that its famous rings, seen on edge only a couple of years ago, are now wide spread again, tilted towards us at an angle of 24 degrees. You need a telescope magnifying about 25 times to see that Saturn has rings, and about 100 times to get a good view of their shape and shadows.

Whenever you look at Saturn with your telescope, see how many of its moons you can see. Even the smallest telescope will show you its largest moon, Titan, and larger telescopes will show four or five more. A planetarium program like Starry Night will help you identify the moons.

The crescent moon will be a thin fingernail of light, only 8-percent illuminated by the sun. You should be able to see the rest of the moon lit up by earthlight: the sunlight reflected onto the moon by the Earth.

The other astronomical event this week is the solstice, which occurs on Sunday (Dec. 21) at 6:03 p.m. EST (2303 GMT). For those of us living in the Northern Hemisphere, this is the winter solstice, marking the sun's furthest excursion southward in Earth's sky.

Because the sun is as far south as it can get in the sky, it is above the horizon for the shortest time in the whole year. This also means that the night of Dec. 21 will be the longest night of the year. The exact length of the day or night will depend on your latitude. If you live close to the equator, you won't notice much difference, but the further north you go, the shorter the day and the longer the night, until you reach the Arctic Circle, where there will be no day and a 24-hour night.

The winter solstice is sometimes called "midwinter's day," just as the summer solstice, six months later, is called "midsummer's day."Although these mark the extremes of the sun's motion south and north, the actual seasons we experience reach their peaks about six weeks later. That’s because it takes some time for the effects of sunlight to change the temperatures of the atmosphere, the land and the oceans.

Even though the coldest days of winter are still ahead, we will soon begin to notice the shift in the times of sunrise and sunset as the days get longer again.

Editor's Note: If you captured an amazing photo of saturn and the moon, or any other night sky view, that you'd like to share for a possible story or image gallery, please contact managing editor Tariq Malik at spacephotos@space.com.