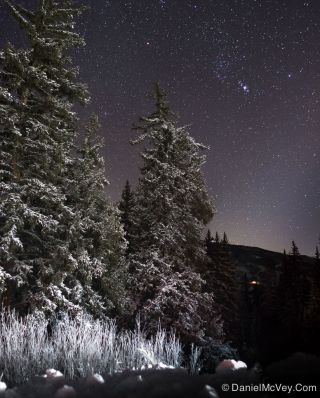 Astrophotographer Daniel McVey sent in this photo of Orion taken in Colorado, Dec. 11, 2012. He writes: "Snow covered trees and Orion high in the sky are sure signs that winter has arrived in Summit County, Colorado." This scene is actually composed of two photographs stitched together in Photoshop.
(Image: © Daniel McVey/www.danielmcvey.com)

This coming Saturday (Dec. 21) marks one of the four major way stations on the Earth’s annual journey around the sun.

Because of the tilt in the Earth’s axis of rotation, the sun appears to rise and fall in our sky over the course of a year. It’s not the sun itself moving, but the Earth moving relative to the sun.

The Earth’s axis currently points in a northerly direction close to the second-magnitude star Polaris, also known as the Pole Star. Everything in the sky, including the sun, appears to revolve around this almost fixed point in the sky. [Season to Season: Earth's Equinoxes & Solstices (Infographic)]

The sun crosses the equator travelling northward around March 21 and going southward on Sept. 21, in celestial events known as "equinoxes" (from the Latin for "equal night," as day and night are of roughly equivalent length on these dates.) The exact dates vary a little bit from year to year because of leap years.

These four dates have been extremely important to humanity since we first started to grow crops 10,000 years ago. Our ancestors have built amazing structures over the millennia to track these important landmarks. For example, Stonehenge in England was built as an astronomical observatory, its stones precisely oriented to detect the extremes of the sun’s movement.

Our calendar is based on the dates of the equinoxes and solstices, though errors over the years have caused the calendar to shift by 10 days from the celestial dates. Many cultures in the world use the winter solstice to mark the beginning of the year. The other three dates neatly divide the year into quarters, or seasons.

The accompanying chart shows what the sky would look like this coming Saturday at precisely 12:11 p.m. EST (1711 GMT), if somehow the sun’s light could be dimmed so that you could see the background stars. The sun is traveling from right to left along the green line, called the "ecliptic" because eclipses happen along it. The sun is as far south as it can get at that instant, and begins moving northward immediately.

For some odd reason, the winter solstice has come to be known as "the first day of winter" while the summer solstice continues to be called correctly "midsummer’s day." Although Dec. 21 gets less sunshine than any other day in the year in the Northern Hemisphere, it is far from the coldest day of the year, because the weather always lags a month or two behind the exact calendar dates.