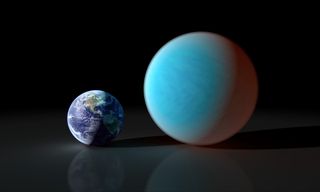 An artist's conception shows the size of super-Earth 55 Cancri e compared to Earth. A ground-based telescope in Spain was able to identify 55 Cancri e, which suggests that telescopes on the ground help in the search for habitable planets around other stars.
(Image: © NASA/JPL)

Finding Earthlike planets beyond our solar system has largely been the work of space-based telescopes, but new observations from a remote island suggest that could change.

The Nordic Optical Telescope on La Palma — one of the Canary Islands off the west coast of Africa — observed 55 Cancri e, a planet twice the size of Earth, as it passed in front of its parent star and caused a dip in the star's brightness, according to a new study. This is the first time a planet in this "super-Earth" size category orbiting a sunlike star has been observed by a ground-based telescope using this detection method, the researchers say.

First identified in 2004 by a space-based telescope, 55 Cancri e has a diameter of about 16,000 miles (26,000 kilometers) — about twice that of Earth. The alien world is eight times as massive as Earth, making it a so-called super-Earth, a planet more massive than Earth but significantly smaller than gas giants like Neptune and Uranus. While not habitable, the planet's size and position around a sunlike star make it similar to planets that might support life, researchers say. [7 Ways to Discover Alien Planets]

The planet's detection with the Nordic telescope shows that observatories on the ground could use what's called the transit method — watching for dips in the brightness of a star to indicate a planet passing in front of it — to assist space-based telescopes in follow-up studies of super-Earths or Earthlike exoplanets, scientists say.

Nearly 2,000 exoplanets have now been confirmed, and upcoming exoplanet searches promise to expand that catalog.

"We expect these surveys to find so many nearby terrestrial worlds that space telescopes simply won't be able to follow up on all of them. Future ground-based instrumentation will be key, and this study shows it can be done," Mercedes Lopez-Morales, co-author of the new research and a researcher at the Harvard-Smithsonian Center for Astrophysics (CfA), said in a statement.

Five exoplanets orbit the star 55 Cancri, which is located 40 light-years from Earth and is visible to the naked eye. The closest-orbiting of those five is 55 Cancri e, which completes one lap around the star every 18 hours. When the planet passes between Earth and the parent star, 55 Cancri appears to dim by 1/2000th (or 0.05 percent) for almost 2 hours, researchers said.

Detecting such subtle changes is difficult for telescopes on the ground because of the blurring effect of Earth's atmosphere. Space-based telescopes escape this problem completely, but technologies exist to help ground-based telescopes adapt to this challenge.

Daytime temperatures on 55 Cancri e likely reach higher than 3,100 degrees Fahrenheit (1,700 degrees Celsius) — hot enough to melt metal and much too hot to support life. But scientists involved with the study say this approach could help characterize the atmosphere of more hospitable Earthlike or super-Earth planets.

"With this result, we are also closing in on the detection of the atmospheres of small planets with ground-based telescopes," Lopez-Morales said. "We are slowly paving the way toward the detection of biosignatures in Earthlike planets around nearby stars."

Another super-Earth called GJ 1214b, located 42 light-years from Earth, was previously detected by ground-based telescopes using the same transit method, researchers said. GJ 1214b is larger than 55 Cancri e, with a diameter about 2.7 times that of Earth and a mass seven times greater than Earth's. GJ 1214b orbits a red dwarf, a class of stars that are significantly smaller and dimmer than Earth's sun. 55 Cancri e was the first super-Earth detected around a main sequence star, similar to our sun.

In addition to the wealth of planets identified by NASA's Kepler Space Telescope, the space agency's Transiting Exoplanet Survey Satellite (TESS) mission, scheduled for launch in 2017, is expected to "discover thousands of exoplanets in orbit around the brightest stars in the sky," according to the TESS website. The European Space Agency's Planetary Transits and Oscillations of stars (PLATO) mission, planned for launch in 2024, will also search for a large number of exoplanets.

"Our observations show that we can detect the transits of small planets around sunlike stars using ground-based telescopes," Ernst de Mooij of Queen's University Belfast in the United Kingdom and lead author of the study, said in the statement from CfA. "This is especially important because upcoming space missions, such as TESS and PLATO, should find many small planets around bright stars, and we will want to follow up the discoveries with ground-based instruments."