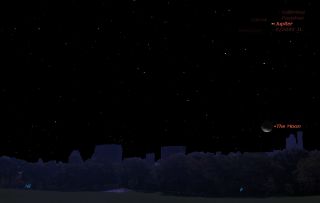 Weather permitting, Jupiter can be seen high above the moon in the eastern sky before dawn on Sunday, Nov. 16, 2014 as shown in this sky map.
(Image: © Starry Night Software)

If you were up late Friday night, or rather awake in the wee hours of Saturday, you may have seen two brilliant objects that will immediately catch your eye if the sky is clear.

The first was the moon, a waning crescent phase that is about 44-percent illuminated, which emerged from above the east-northeast horizon around midnight local standard time. And shining brightly, roughly 10 degrees above the moon was the largest planet in our solar system: Jupiter.

Your clenched fist held out at arm's length covers about 10 degrees of the night sky, so the moon and Jupiter will be separated by roughly one fist. It is, of course, an illusion of perspective: the moon is only 250,300 miles (402,600 km) from Earth. Meanwhile, Jupiter is 483 million miles (776 million km) away — over 1,900 times farther out in space compared to our natural satellite. [Amazing Photos of Jupiter]

At a dazzling magnitude of -2.1, Jupiter shines twice as bright as Sirius, the brightest star in the night sky. Whenever it's above the horizon, Jupiter — which is 88,800 miles wide (143,000 kilometers) — always attracts immediate attention; to the eye it resembles a brilliant silvery white, non-twinkling "star." By Feb. 6 it will arrive at opposition and be visible all night from sunrise to sunset.

Look for Jupiter currently glimmering balefully above the east-northeast horizon by 11 p.m. your local time. But Jupiter will not reach a position 30 degrees above the horizon — one third of the way up in the sky — until 1:45 a.m. local time. For some, that’s considered to be the dividing line between objects that are "low" versus objects that are considered to be "well placed." Sharp telescopic views are seldom possible until an object reaches an altitude of 30 degrees, given the typical turbulent state of Earth's atmosphere.

In a telescope, Jupiter is always a fascinating sight. Light and dark cloud belts in the giant planet’s atmosphere appear to parallel the equator and slowly change, while the famous Great Red Spot, some 30,000 miles long now appears rather pale and has been described with hues ranging from very pale beige to salmon pink. The other attractions are the four Galilean satellites, Jovianmoons were first seen by Galileo with his crude telescope in 1610.

Early Saturday morning initially, just three moons were likely evident, two appeared at nearly equal distance from Jupiter, each flanking the big planet on either side: Ganymede and Europa. Located at a much greater distance out from Jupiter on the same side as Ganymede will be Callisto. Where was the fourth moon (Io)?  It was behind Jupiter at the time, in what astronomers call an "occultation." But at 5:27 a.m. Eastern Time or 2:27 a.m. Pacific Time, Io emerged into view from behind Jupiter … on the same side as Ganymede and Calisto.

Not including our own moon, we had four moons for the price of one!