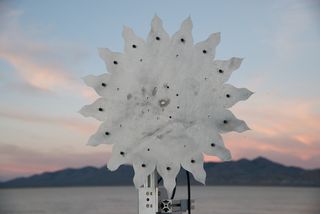 "Starshade" technology that could help astronomers find and characterize rocky, Earthlike alien worlds was put to the test earlier this year in the Nevada desert.

A starshade, also dubbed an external occulter, is a precisely shaped screen that flies in far-away formation with a space telescope. The device blocks a star's light to create a high-contrast shadow, so that only light from an orbiting exoplanet enters the telescope for detailed study.

While a starshade to hunt alien planets has not been flown before, researchers studying the technique are drawing upon a track record of success in fielding large, deployable antennas in space. Some designs foresee a fully deployed starshade measuring some 110 feet (34 meters) in diameter, with a 65-foot (20 m) inner disk and 28 outstretched flowerlike petals, each over 22 feet (7 m) in length. [7 Ways to Find Alien Planets]

The starshade idea has moved beyond the drawing board.

Subscale versions of starshades have undergone nighttime desert testing, most recently at central Nevada's Smith Creek dry lake bed over five nights in late May and early June of this year. Previously, a California test locale was used. [How the Planet-Hunting Starshade Unfolds in Space (Video)]

The recent Nevada test took advantage of the thin air and very dark skies at high-altitude Smith Creek, Warwick said. A six-person team made use of a modified Celestron telescope and ultrabright, light-emitting diodes (LEDs) placed about 1 mile (1.6 kilometers) away. The LEDs were all finely aligned with an automated stand topped by a starshade model sitting in the middle of the test range.

Data and images were gathered at the telescope stand.

"As you can imagine, we take a lot of data while we're sitting out there in tents at night," Warwick told Space.com. "There is a lot of post-processing that we have to do … and that's underway at the moment."

A lot will be asked of a starshade on a planet-hunting space mission.

In the simplest terms, a starshade is a specially shaped finger placed in front of a bright source to dim the light, said Ron Polidan, manager of science systems at Northrop Grumman Aerospace Systems.

"So in essence you can consider it a traveling dark spot," Polidan said.

Polidan said that company technologists are looking at several options on how best to unfold a large starshade in space. For example, there's heritage to be found in Northrop's lead work on NASA's Tracking and Data Relay Satellite System, he said, as well as in building the space agency's $8.8 billion James Webb Space Telescope (JWST).

"So part of the assessment going on with the desert tests is to understand simple and reliable deployment systems," Polidan told Space.com.

Northrop Grumman's starshade is "telescope agnostic," said Warwick. That is, it could be used with JWST, which is scheduled to blast off in 2018, or with other space scopes being considered. In the end, it's up to NASA, he said.

Starshades aid in direct imaging, helping telescopes gather photons arriving from a target planet. They can help deliver spectroscopic looks of the atmosphere of an exoplanet, "and that's where it feeds into the search for life," Warwick said.

Additional starshade testing in the desert is in the offing for next year, Warwick said. All the ground work, he said, is confidence-building in order to move forward on a future space-size starshade mission.

"We can never do an 'end-to-end test' of the starshade concept. So instead, we break the testing into two parts," said Sara Seager, professor of planetary science and physics at the Massachusetts Institute of Technology in Cambridge, Massachusetts.

Seager told Space.com via email that one test phase involves fabrication and deployment to show that the required tolerances and construction of the starshade petals can be met. The other is subscale environmental testing in a lab or outdoors to demonstrate that starshade experts "understand the math and that diffraction behaves as we expect," she said.

"This two-step process is our best option," Seager said.

There's one simple bottom line for Seager: Seeing is believing. The desert testing offers one way to make that happen.

"What we would absolutely love to see is an actual astronomical discovery using the starshade," Seager said. "People have conceived putting the starshade on one mountain top and a telescope on a lower mountain peak."

When an object of interest passes over the starshade — say a star with a debris disk — perhaps an interesting observation can be made, she said.

"We have to show the world that the starshade is a part of the astronomer's tool kit," Seager said.

Leonard David has been reporting on the space industry for more than five decades. He is former director of research for the National Commission on Space and is co-author of Buzz Aldrin's 2013 book "Mission to Mars — My Vision for Space Exploration" published by National Geographic. Follow us @Spacedotcom, Facebook or Google+. Originally published on Space.com.