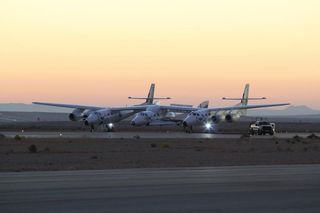 Virgin Galactic's passenger spacecraft SpaceShipTwo (attached to its WhiteKnightTwo carrier) crashed in Mojave, California after a serious accident during the craft's fourth rocket-powered test flight on Oct. 31, 2014. One pilot was killed and another injured in the crash.
(Image: © Scaled Composites / Jason DiVenere)

Virgin Galactic may be gone, but it's not out, company representatives say.

One pilot was killed and another injured when SpaceShipTwo went down Friday (Oct. 31) during a rocket-powered test flight from Mojave Air and Space Port in California. The cause of the crash is unclear at the moment.

Virgin Galactic CEO George Whitesides said the company will figure out what went wrong and continue to work to get SpaceShipTwo up and running. [SpaceShipTwo Crash: First-Hand Account From Mojave (Video)]

"Space is hard, and today was a tough day," Whitesides said during a post-crash news conference Friday.

"We are going to be supporting the investigation as we figure out what happened today, and we're going to get through it," he added. "The future rests, in many ways, on hard days like this. But we believe we owe it to the folks who were flying these vehicles, as well as the folks who have been working so hard on them, to understand this and to move forward, which is what we'll do."

"Space is hard — but worth it," Branson said via Twitter Friday. "We will persevere and move forward together."

Mojave-based aerospace firm Scaled Composites builds the six-passenger, two-pilot SpaceShipTwo for Virgin Galactic. The space plane is designed to be lofted by a mothership, known as WhiteKnightTwo, to an altitude of about 45,000 feet (13,716 meters); at that point, SpaceShipTwo is released, and its onboard rocket motor kicks on, carrying it to suborbital space.

That's how things will work during commercial operations, anyway; the vehicle is now in the test phase. Friday's test was the fourth rocket-powered flight for SpaceShipTwo, and its 55th test flight of any kind.

A ticket to ride SpaceShipTwo currently sells for $250,000; to date, more than 700 people have put down deposits to reserve a seat, Virgin Galactic representatives say.

"This business is worthy business," Witt said, urging people in the industry to "stay the course."

"It's a cause far greater than any one of us singularly," he added. "I equate it to the Magellan mission."