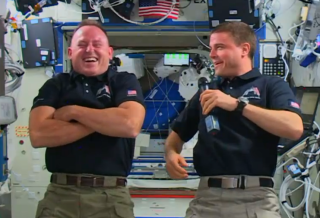 A private spacecraft expected to launch to the International Space Station today (Oct. 28) is going to deliver some tasty treats to the astronauts living aboard the orbiting outpost.

Orbital Sciences' Cygnus spacecraft should be carrying some crab cakes from Maryland to space for NASA astronaut Reid Wiseman, the space agency's chief Charles Bolden said during a live event today. Cygnus was initially expected to start on it journey to the space station yesterday (Oct. 27), but a sailboat roaming into restricted waters forced the launch delay.

"Reid, I have a message for you, the crab cakes are on the way," Bolden told Wiseman during a call up to the space station today. "They were delayed, but they should get there on time … But we had just a small sailboat that kept us from launching last night." [See the Antares Rocket's 1st Night Launch from East Coast (Visibility Maps)]

Wiseman promised Bolden that he would share the crab cakes with NASA's Barry "Butch" Wilmore (who also participated in the call) and the four other international crewmembers on the space station.

Cargo ships regularly bring fresh food and other supplies to the space laboratory for astronauts and cosmonauts living aboard. Cygnus — which is scheduled to blast off atop an Antares rocket at 6:22 p.m. EDT (2222 GMT) today from Virginia — is loaded down with 5,000 pounds (2,268 kilograms) of supplies for the station. You can watch the rocket launch live on Space.com via NASA TV.

The launch could also be visible to people up and down the East Coast of the United States.

Orbital Sciences has a $1.9 billion contract with NASA to fly eight robotic missions to the space station using the company's Cygnus spacecraft and Antares rocket. Tonight's launch will be the beginning of Orbital's third official resupply run to the station.