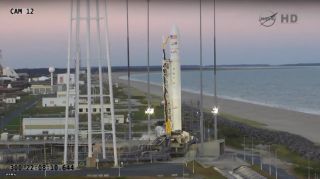 A private cargo spaceship was poised to make a gorgeous nighttime liftoff Monday (Oct. 27) visible to millions of people along the United States East Coast. But then a boat got in the way.

The unexpected presence of a boat downrange of NASA's Wallops Flight Facility on Wallops Island, Virginia, forced launch controllers to scrub Monday's planned liftoff of Orbital Sciences' unmanned Cygnus spacecraft, which was all set to blast off atop an Antares rocket at 6:45 p.m. EDT (2245 GMT) on a resupply run to the International Space Station.

The nighttime rocket launch is now set for Tuesday (Oct. 28) at 6:22 p.m. EDT (2222 GMT). Weather permitting, the launch could be visible for observers all along the U.S. East Coast, from as far north as Massachusetts and as far south as South Carolina, NASA officials said. [How to See the Nighttime Antares Rocket Launch]

Mission controllers tried repeatedly to contact the wayward boat that thwarted Monday night's launch attempt, but they could not get the boat to move in time.

"This was strictly a range issue this evening that terminated the count just 10 minutes before the scheduled liftoff time at the end of a 10-minute window," NASA commentator Rob Navias said during a webcast of the attempted launch.

Orbital Sciences executive vice president Frank Culbertson, a former NASA astronaut, congratulated launch team members for their work leading up to the planned liftoff and shrugged off the boat-caused delay.

Cygnus is set to deliver 5,000 pounds (2,268 kilograms) of food, supplies and scientific experiments to the astronauts aboard the station. Virginia-based Orbital Sciences holds a $1.9 billion deal with NASA to make eight such supply runs and has already completed two of them.