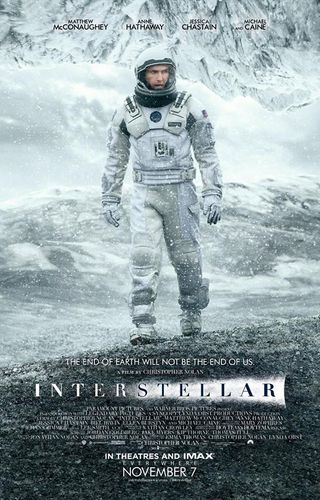 A theatrical poster for the space epic "Interstellar," which is directed by Christopher Nolan and stars Matthew McConaughey (shown here). The film will be released in select IMAX theaters on Nov. 5, 2014 and throughout the United States two days later.
(Image: © Paramount Pictures)

LOS ANGELES — All the buzz around the upcoming space epic "Interstellar" is understandable. The film is a great ride — big, bold, loud, dramatic and visually stunning.

The crowd at the TCL Chinese Theater here in Hollywood for a sneak-peak viewing on Thursday (Oct. 23) — a collection of journalists and actors who got an invite and fans who waited in line for ages to get in — soaked up "Interstellar" throughout its nearly three-hour running time, even erupting in cheers at several key points during the film.

In short, the feeling inside the theater seemed to be that "Interstellar," which will hit theaters nationwide in the United States on Nov. 7, doesn't disappoint despite its considerable hype. ['Interstellar': A Space Epic in Pictures]

That hype stems partly from the film's star power. "Interstellar" was directed by Christopher Nolan, who has helmed a number of commercially and critically successful films, including "Memento," "Inception" and the "Batman" Dark Knight trilogy. And it features big-name actors such as Matthew McConaughey, Anne Hathaway, Jessica Chastain and Michael Caine.

The subject matter of "Interstellar" is also responsible for some of the excitement, especially among space fans. As the film's trailers have shown, a series of crises on Earth are driving humanity toward extinction. So McConaughey's character, Cooper, leads a small band of explorers in a search for an exoplanet that could serve as a new home for our species.

This intergalactic search is aided by a journey through a wormhole — a sort of tunnel through the fabric of space-time that allows relatively rapid travel between two widely separated points. "Interstellar" also features stunning depictions of spaceflight, alien worlds and what its creators say is the most accurate visualization of a black hole ever accomplished in a mainstream movie.

In fact, the film's black hole is so visually realistic that scientists could learn a thing or two from it, said renowned theoretical physicist Kip Thorne, one of the executive producers of "Interstellar."

"We're going to write several technical papers about this — one aimed at the astrophysics community and then something for the computer-graphics community — saying, Here are some things we've discovered about gravitational lensing by rapidly spinning black holes that we never knew before," Thorne said in a video produced by Wired magazine that was released last week.

Keep checking back in with Space.com for more news about "Interstellar," including a full review and an analysis of the science in the film.

Interestingly, "Interstellar" comes out on the same day (Nov. 7) as another movie of interest to space-science fans — "Theory of Everything," a biopic about famous astrophysicist Stephen Hawking.