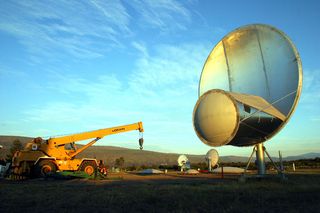 Following arecent demonstration of a 10-dish element of the Allen Telescope Array (ATA),the United States Navy has signed off on a $1.5 million agreement to use thearray along with another 10-dish installation to be developed in the nearfuture.

The ATA isa general-purpose radio telescope designed to provide new measurements andinsights into the density of the very early universe, the formation of stars aswell as other applications. The observatory is located the Hat Creek RadioObservatory in the mountains northeast of San Francisco. Investor andphilanthropist Paul G. Allen has committed $13.5 million to the construction ofthe first and second phases of the array.

Whencomplete, the ATA will consist of 350 6.1-meter dishes. Twenty dishes are currentlyonline at the observatory with a 42-dish array total to be completed near theend of the year. Though the project is slightly behind schedule due to therecent heavy northern California winter and the usual challenges of engineeringa radical new technology, one of the project's leaders is particularly pleasedby recent progress.

"Things arenow moving fairly quickly," said Dr. Jack Welch of U.C. Berkeley Radio Astronomy Laboratory. Welch, who in great part conceived the ATA project and is the observatory's former director, added that the challenge of building a completely new type of radio telescope array has been further energized by the USNO involvement.

Representativesof the United States Naval Observatory (USNO) visited the array in mid-Julywhen the instruments were undergoing initial testing and observations. Theywere interested in the observatory's ability to monitor the ever-increasingamount of space debris found in Earth orbit.

"They areinterested in using the dishes for possible applications for what is known as'space situational awareness' that is an important arena for the Department ofDefense (DoD)," Welch told SPACE.com.

Accordingto Welch, the ATA is the ideal technology to help get a handle on this sincethe nation's investment in communications, GPS, weather and of course, defenseconstellations of satellites not to mention the dangers posed to theInternational Space Station, Shuttle and future human spaceflight.

One of thestrength's of the ATA's capabilities is its unique ability to filter throughthe signatures of orbiting objects while searching the skies forextraterrestrial signals and astrophysical phenomena.

"Forexample, if a laptop computer was started up in geosynchronous orbit, the ATAcould detect it," Welch said. "It can also do radar studies to locate anddetect echoes from a wide variety of things such as orbiting satellites."

While theNavy's interest in the project and its investment gives the project a mustneeded boost, astronomy and SETI research remain the telescope's primarypurpose. "Our overall goal is not to do this but rather as a demonstration oftechnology that the Department of Defense can take and use for its ownscientific research purposes," Welch said.

The U.S.Navy has a long history of doing scientific research dating back to theestablishment of the United States Naval Observatory in Washington, D.C. where astronomer Asaph Hall first discovered Phobos and Deimos, the moons of Mars in1877.

Currentprojects include a wide variety of research projects in optical and radioastronomy. When asked about the Navy's involvement in the ATA project, USNOScientific Director, Dr. Ken Johnston said that they were pleased to be a partof the ATA's work.

"The UnitedStates Navy is always interested in basic research that may lead to technologyapplications for present and future DoD needs," Johnston said.