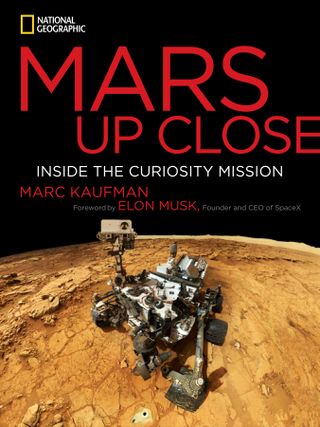 Journalist Marc Kaufman has written about science and international affairs for more than three decades, primarily for The Washington Post and the Philadelphia Inquirer. Kirkus named his previous book, "First Contact: Scientific Breakthroughs in the Hunt for Life Beyond Earth" (Simon & Schuster, 2011), one of the best nonfiction works of 2011. Kaufman contributed this excerpt to Space.com's Expert Voices: Op-Ed & Insights.

NASA's Curiosity rover has been reshaping scientists' understanding of Mars since touching down on the Red Planet in August 2012. The chief goal of Curiosity's $2.5 billion mission is to determine if Mars could ever have supported microbial life. Rover scientists have already answered that question in the affirmative, finding that a site called Yellowknife Bay was a habitable lake-and-stream system billions of years ago.

But Curiosity's work is far from done. Last month, the 1-ton rover reached the base of the towering Mount Sharp, which has long been Curiosity's ultimate destination on the Red Planet. Mission team members plan to send Curiosity up through Mount Sharp's foothills, reading the rocks for clues about how and why Mars shifted from a relatively warm and wet world long ago to the cold, dry planet we know today.

Marc Kaufman's new book "Mars Up Close: Inside the Curiosity Mission" (National Geographic, 2014) takes readers along on the rover's journey, providing behind-the-scenes details Kaufman dug up by spending many hours with key mission personnel. Stunning imagery is another highlight, as expected from a National Geographic book.

"Mars Up Close" also features a foreword by SpaceX founder Elon Musk, who hopes his spaceflight company's efforts help lead to the establishment of a permanent Mars colony. The following is an excerpt from the book:

"If you come up with a big new idea in our world and everyone says, 'Hey, that’s great, deﬁnitely go ahead with that,' then you know it’s not a big new idea at all. Anything really new brings out all the reasons why it can’t possibly work, and why it’s crazy even to think about it. That’s certainly what we heard."

So explained Adam Steltzner, a former rock 'n' roll guitarist with the ear studs and Elvis pompadour to prove it. But in his professional guise, he was one of the NASA mission masterminds behind the most ambitious landing on another planet ever designed — the Curiosity touchdown on Mars.

He and his team at the agency's Jet Propulsion Laboratory, or JPL, had been tasked with the job of landing a one-ton, SUV-size rover on Mars. Their solution was to use a revolutionary, untried "sky crane." The capsule would hurtle down from space at 13,200 miles an hour to near zero in less than seven minutes. What remained of the entry spacecraft would use rockets to maintain a steady, 1.7-mile-an-hour descent.

Beginning some 65 feet (20 meters) above the ﬂoor of Gale Crater on Mars, the rover, dubbed Curiosity in a national naming competition, would then be gently lowered to the surface via three tethers and a central communications and power "umbilical." A risky venture for sure.

Following NASA tradition, Steltzner and his sky-crane colleagues decided to name their sky-crane landing as well. They considered their plan to be audacious and relished the fact that they were willingly taking on the challenges of Mars in a new way. The name wasn't hard to agree on: The Entry, Descent, and Landing (EDL) phase would be called Audacity.

As the August 5, 2012, landing day approached, the indefatigable Steltzner had become the articulate and emotionally accessible, very worried, but so clearly talented face of the touchdown drama — the upcoming "Seven Minutes of Terror" that had captured the imagination of millions of people around the world.

BUY "Mars Up Close: Inside the Curiosity Mission" >>>