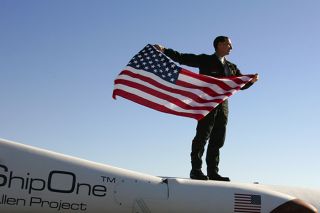 This weekend marks the 10-year anniversary of the winning of the $10-million Ansari XPrize by Burt Rutan and the SpaceShipOne team. In recognition of the anniversary, XPrize interviewed test pilot Brian Binnie. On Oct. 4, 2004, Binnie was at the controls of SpaceShipOne when it rocketed to an altitude of 367,442 feet, or 69.6 miles above the Earth's surface. Binnie recently sat down with XPrize to discuss that history-making flight, and share his take on the current state of the commercial space industry.

To join the Google+ Hangout, RSVP for the event.

Brian Binnie: Total trepidation. The night before the flight, the Discovery Channel aired the first portion of the documentary, "Black Sky: The Race for Space." It chronicled all the efforts to date to get Mike Melvill into space. [Related: How SpaceShipOne and X Prize Launched Commercial Spaceflight]

During a commercial break, the network cut away to a reporter standing by live at Burt Rutan's house in Mojave. The reporter asked Burt who was going to be the pilot for the flight the next morning, but he wouldn't answer. All he would say is, "Not only are we going to hit a home run tomorrow, it's going to be a Grand Slam!"

I'm watching this and pacing around the living room thinking, "My God! It's not like the bar isn't high enough already!"

That was about as much as I could stand, so I turned off the TV. My in-laws were in town to watch the flight and they were given the master bedroom. I was downstairs on the couch — which was also our dog's bed. After a bit of a standoff, I finally got to bed at about 11:00 p.m.

When the alarm went off at 2:15 a.m., I felt like the last person in the world who was going to do anything particularly clever that day — let alone "hit a Gland Slam."

After the pre-flight briefing, which was at 4:30 a.m., there was the final weigh-in to verify that we had the equivalent of 600 lbs. of payload. My body weight (and gear) was considered part of those 600 lbs.

As I walked toward SpaceShipOne, my mother-in-law appeared out of the crowd to give me a good-luck hug. She had a large cup of heavily sugared coffee in her hand, and as she wrapped her arms around me, she poured about half of it down my flight suit! I didn't have a change of clothes and we were right on our flight timeline, so I manned up with this sticky mess all over me.

One of our engineers — an aerodynamicist — stuck his head in the spaceship and said, "You're wearing about 12 ounces of coffee. That 12 ounces is going to cost you about 500 feet of apogee."

During Mike Melvill's first flight into space, he just barely got across the Karman Line by just 400 feet! (The Karman Line lies at an altitude of 100 kilometers above the Earth's sea level, and commonly represents the boundary between the Earth's atmosphere and space.)

So with that news, the door was closed, and off we went to see what the morning would bring.

XPrize: What was your biggest concern prior to the flight?

Binnie: There's something called the "test pilot's prayer," that was coined by Alan Shepard, the first American in space. It goes like this: "Dear God, please don't let me screw up." Except he didn't say "screw."

That's how most test pilots are. We know how to fly. We have a certain amount of confidence in our abilities. But there are always unknowns, and how you react to them and respond is a concern. There are likely 10 wrong ways to react and maybe one right one … so the prayer is, "Dear God, please help me find the one right thing."

And honestly, every powered flight (of SpaceShipOne) up to that point was full of surprises, so there was no reason to expect that this flight was going to be any different.

XPrize: Did Burt Rutan say anything to you before the flight?

Binnie: Burt and I were golfing buddies long before he hired me to work at Scaled Composites. He pulled me aside and said, "Take out your driver, swing smooth and go long." Which is exactly how the flight went.

XPrize: Describe the moment of release from White Knight?

Binnie: The actual moment of release was no big deal. We had been initially concerned about hitting the mother ship, but we had worked it out by then.

About a minute prior to release, there was a lot more drama: I had not flown the vehicle in 10 months. Then there was my lack of sleep, my wet flight suit, the heavy smell of sugared coffee that overwhelmed the little cabin I was sitting in. The TV trucks with their satellite antennas up and broadcasting to the world.

There's a saying in the military: "There are no atheists in a three-man foxhole." I was joining that crowd and doing my best to invoke the good graces of God — or anybody else that was listening — that could help make this flight successful. But after release, it was all business.

Prior to this flight, we typically waited for mission control to assess the systems and then come back and say we were clear to fire. But on this flight, we skipped that step. Once you drop from the mother ship, it's all lost altitude before you light the rocket motors. So as soon as I felt the "thump" of the hooks opening, I flipped those switches. The rocket motor fired, and the engineer who pulled the release handle in the back of White Knight said out loud, "Holy crap! That was close!"

XPrize: Let's talk about the weightlessness — and the view.

Binnie: If I were in the physiology or mental health fields, I think I could write a Ph.D. dissertation asserting that is impossible to be depressed or melancholic while weightless. It is a wonderful feeling!

The way you arrive there via SpaceShipOne is that you spend about a minute and a half in front of this thundering, noisy, jarring, almost angry rocket motor. You're really unprepared for it. There's nothing in your DNA that prepares you for riding a rocket … or in our case, flying an airplane while riding a rocket.

So the magic of the moment is when you finally shut that motor down. In an instant, three things happen: The shifting, thundering vibrations of the rocket motor go away. The noise — the shrill, shrieking sounds of that motor — disappears. Then it's as though you've stepped across a line into an entirely new dimension … the instant karma of weightlessness. It is a magical transition, and no matter how many times I describe it, I can't possibly spoil it for you.

Being a pilot, I was head-down, watching the guidance display. But but when I finally looked up from the instruments, the view was just breathtaking! Out of one window, there was the black void that is space. In my mind, there's a sense of mystery and a sense of menace, but you can also sense its majesty.

Look out a different window and it's a peaceful panorama. I saw the lights from Mojave, San Francisco, Baja, Mexico, the Pacific Ocean and the Sierra Nevada mountains. You can even pick up weather patterns you normally only see on the evening news.

And then separating these two improbable vistas is a thin, blue ribbon of light.

Because you've worked hard to get there, everything you feel in your body is, for lack of a more sophisticated description: "Wow! I'm in space in a spaceship, and this is awesome!"

XPrize: Your team's accomplishment ushered in the era of private spaceflight. What's the current state of the commercial space industry, and where is it headed?

Binnie: I think everybody's a little shell-shocked that 10 years later, the achievement has not been repeated by Virgin Galactic or Blue Origin — or by any of the other teams vying for the Ansari XPRIZE in the first place. That being said, it just goes to show you how persnickety some of the technology is in this arena. No one can afford an accident, so if there are any doubts, the schedule takes a hit.

But I believe we are getting closer and closer. It's easy to be a pessimist, to say, "It will never happen, private industry doesn't have the money to pull it off." I take the other view. I believe that in five years, Virgin Galactic, XCOR and Blue Origin will have competing operations that serve wealthy customers. In 10 years, your children or grandchildren will know that they will be able to go into orbit in their lifetime. And in 25 years, there will be destinations to travel to other than the International Space Station.

The technology is already in place — it just needs a bit more testing. There needs to be confidence in the reliability, the robustness, and ultimately the reusability of the systems. If you are going to make commercial space travel affordable, you can't keep throwing away half your vehicle every time you fly it.

XPrize: Would you go back up into space?

Binnie: I'd love to go back. One common denominator among all the astronauts I've met over the years is that having been there once, people want to return. Once you've had that experience, it's one that naturally self-seeks a return visit. If you build a safe, reliable spaceship, you won't have to beat the bushes to find people who are willing to pay for, or want, the opportunity to go into space. [Public-Private Partnerships Key to US Spaceflight Future, Experts Say ]

XPrize: When you look up and see SpaceShipOne hanging next to The Spirit of St. Louis in the Smithsonian National Air and Space Museum, what do you feel?

Binnie: I'm humbled as much as anything. I'm honored to be the last guy to fly SpaceShipOne, but there was an awful lot of engineering talent, not the least of which was Burt Rutan. It was his inspiration. It was all very demanding, very difficult and fraught with problems and issues — but we were able to overcome them, and the last flight was essentially flawless.

We scooted out of the atmosphere, went past the Karman Line, beat the longstanding X-15 altitude record, and returned safely from where we started without a single squawk. There wasn't anything that needed to be done with the vehicle in terms of maintenance. It was good to go. It was a very rewarding ending to an otherwise hugely demanding program. I think for people who worked on it… it wrung them out emotionally from start to finish. To have the Smithsonian recognize that effort and achievement is extremely fulfilling.