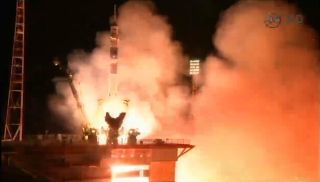 An American astronaut and two Russian cosmonauts have blasted off on a history-making trek to the International Space Station, where they will spend nearly six months working in orbit.

"I think I feel the same thing as all other crewmembers: It's a huge responsibility; we are excited," Serova said through a translator during a prelaunch press briefing from Baikonur. [Women in Space: A Gallery of Firsts]

"We would like to say a special thank you to all people who supported us, who trained us, who built our rocket," she added. "We will do our best."

The Soyuz is scheduled to reach the International Space Station about six hours after liftoff. You can watch a live webcast of the capsule's arrival on Space.com, courtesy of NASA TV. The docking webcast will begin at 9:45 p.m. EDT (0145 GMT). Another webcast at 11:30 p.m. EDT (0330 GMT) will show the Soyuz crewmembers entering their new orbital home.

Wiseman radioed NASA's Mission Control at the Johnson Space Center in Houston shortly after the Soyuz launch to say he and his crewmates were able to watch a video feed live.

"That looked like a good ride," Wiseman said. "We look forward to seeing them in orbit, and we'll have dinner ready waiting for them."

Serova, 38, is the first Russian woman to leave Earth since Elena Kodakova visited Russia's Mir space station on a space shuttle mission in 1997. The other two female cosmonauts were Svetlana Savitskaya, who flew on space missions in 1982 and 1984, and Valentina Tereshkova, who in 1963 became the first woman to reach space.

An American woman didn't get to orbit until Sally Ride flew on the STS-7 space shuttle mission in 1983. But a number of female NASA astronauts have lived and worked aboard the International Space Station. Peggy Whitson, for example, became the first woman to command a space station mission when she took the reins of Expedition 16 in 2007.

While Serova is a spaceflight rookie, today's launch marks the second space mission for both Wilmore and Samokutyaev.

Russia's Soyuz spacecraft and rockets are currently NASA's only way to launch American astronauts into space since the retirement of the U.S. space shuttle fleet in 2011. Last week, NASA announced that it will fly astronauts to the International Space Station on new private space taxis built by the commercial spaceflight companies SpaceX and Boeing beginning in 2017.

Construction of the $100 billion orbiting outpost began in 1998, and it has been staffed continuously by rotating crews on roughly six-month stints since November 2000.