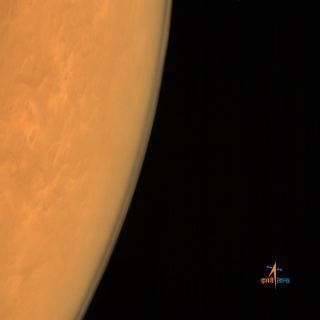 India's first Mars probe has captured its first photos, revealing an early glimpse of the surface and atmosphere of the Red Planet.

The Indian Space Research Organisation (ISRO) unveiled the first photos of Mars from its Mangalyaan spacecraft via Facebook and Twitter on Wednesday and Thursday (Sept. 24-25), just a day or so after the probe made it to the Red Planet.

"The view is nice up here," ISRO officials tweeted about one of the images, which shows a heavily cratered portion of the Red Planet's surface.

Another photo depicts the curving, orange-brown limb of Mars against the blackness of space.

"A shot of Martian atmosphere. I'm getting better at it. No pressure," ISRO officials tweeted about that one.

Mangalyaan, whose name means "Mars craft" in Sanskrit, arrived at the Red Planet on Tuesday night (Sept. 23), making India's space agency just the fourth entity — after the United States, the Soviet Union and the European Space Agency — to successfully place a probe in orbit around Mars.

Mangalyaan is the centerpiece of India's $74 million Mars Orbiter Mission (MOM), which ISRO officials have described as primarily a technology demonstration. The spacecraft carries a camera and four scientific instruments that it will use to study the Martian surface and atmosphere during the course of a mission expected to last six to 10 months.

MOM reached Mars close on the heels of NASA's MAVEN (Mars Atmosphere and Volatile Evolution) probe, which was captured by the Red Planet's gravity on Sunday (Sept. 21). The $671 million MAVEN mission aims to help scientists determine what happened to Mars' atmosphere, which was once relatively thick but is now just 1 percent as dense as that of Earth.

MAVEN has also taken its first images of Mars from orbit; NASA released a few false-color views of the planet's atmosphere on Wednesday.