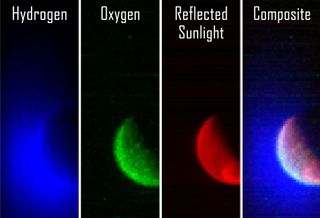 The first observations of Mars' upper atmosphere made by NASA's MAVEN probe, which reached the Red Planet on Sept. 21, 2014.
(Image: © Laboratory for Atmospheric and Space Physics, University of Colorado; NASA)

The false-color images, which NASA released Wednesday (Sept. 24), were captured by MAVEN's Imaging Ultraviolet Spectrograph instrument when the probe was 22,680 miles (36,500 kilometers) above the surface of Mars, agency officials said.

"Blue shows the ultraviolet light from the sun scattered from atomic hydrogen gas in an extended cloud that goes to thousands of kilometers above the planet’s surface," NASA officials wrote in an online description of the image.

The $671 million MAVEN mission, whose name is short for Mars Atmosphere and Volatile Evolution, is NASA's first effort to study the Red Planet's upper atmosphere. MAVEN will use its three onboard instrument suites to measure the rate of gas escape into space, in an attempt to better understand why Mars lost most of its atmosphere over the eons. (The planet's air was relatively thick in the ancient past but is now just 1 percent as dense as that of Earth.)

MAVEN's observations should shed light on how and why Mars transitioned from a warm and wet world billions of years ago to the cold, dry planet we know today, mission scientists have said.

The spacecraft is now in a commissioning phase, during which mission team members will lower MAVEN to its final orbit and check out its science gear. The probe's one-year science mission is scheduled to start in early November.