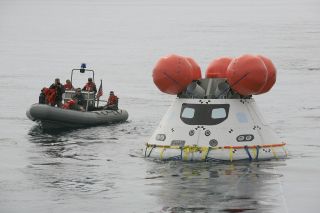 SAN PEDRO, California — NASA's next spaceship, the Orion capsule, has had a wet summer.

For a full week in August, NASA engineers and the U.S. Navy worked side by side to practice retrieving the new spacecraft from the Pacific Ocean after a water splashdown like the one that will end the capsule's upcoming test flight in December.

The tests were based from the USS Anchorage, an amphibious Navy transport that was temporarily assigned to NASA's Orion recovery exercises. Another round of sea trials is scheduled for September. [NASA's Orion Spaceship in Pictures]

"We ran six or seven different tests," said Mike Folger, who manages part of the Orion recovery operation from NASA's Kennedy Space Center, as the sea trials ended on Aug. 6. "First, we released it inside the well deck and make sure that we can control it the way we think we can."

The well deck is an area in the rear of the ship that opens to the sea, allowing water to flood inside. Normally, Marines use it to launch amphibious assault craft. For this first in a series of tests, the NASA and Navy teams simply allowed the capsule to wallow inside the back end of the Anchorage.

"Once we got comfortable with that, we released the test article behind the ship and sent a couple of Navy boats out with divers and a horse collar," Folger said. The horse collar loops around Orion, securing the craft to a winched cable that is used to tow Orion into the recovery ship.

Despite a few small hiccups, including one horse collar that began to come unstitched, the tests were successful.

"We did this in calm seas," Folger said. "Then we looked for seas that were a bit more riled up. We're not sure what the weather is going to be like in December in the Pacific, so we need to try it in a number of different conditions."

The first test flight of Orion is called Exploration Flight Test 1 (EFT-1), and will be launched on a Delta 4 Heavy rocket in early December. [How NASA's First Orion Flight Will Work (Video)]

While Orion is a 21st-century spacecraft, its capsule may remind people of the smaller Apollo command modules from the 1960s. And indeed, much learning from that program has contributed to this vessel's testing.

"We have as a part of our trusted agents guys who worked on recoveries of Apollo spacecraft, and their knowledge has helped immensely," said NASA test director Jeremy Graeber. "They would say, 'Don't forget about this, did you think about this, remember your communications.' … These are all different pieces that we know, but having people with the direct knowledge and experience has been a definite benefit."

Graeber was upbeat about the program, in spite of NASA's smaller budget. The Obama administration's proposed $17.5 billion budget for NASA in 2015 is a 1-percent dip from the space agency's 2014 budget approved by Congress, and about a tenth of what was available during the spending peak of the Apollo program, 1966.

"It's challenging, but the efficiencies come in with being smart about when you do the next thing," he told Space.com. "Apollo had a deadline that said we have to be here by this time, so you have to do everything at the same time. You have to build the spacecraft, build everything on the ground, command and control … everything you needed to have, you had to do all at once."

But Orion and its Space Launch System mega-rocket are different.

"We're looking at this from a long-term perspective … and these are the steps to accomplish that," Graeber said. "We are able to spread things out. We have a stepped approach … We understand it, know how it works. We work within those guidelines.

"We've gotten very good at understanding the process and building things in the right order," he added.

"If the spacecraft doesn't land where we are expecting it to, we would have to use an alternate procedure to get it," Graeber said. "If it's within 600 miles, we are probably able to go with this vessel. But if it's out of range on the day of landing, we would have to use a smaller ship to go and recover it."

For the Orion's December test flight, NASA will evaluate weather conditions for the landing area before launch, and make a commitment to landing at that time, fair weather or foul. The planned recovery zone is about 600 miles west of San Diego.

"EFT-1 will be only two and a half times around the Earth, so we are committed at launch," Folger said. "I think we will have enough flexibility in our recovery strategy that it won't be a problem."