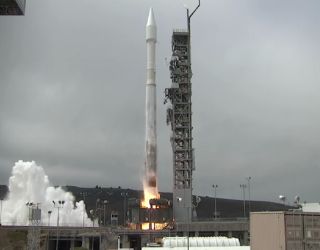 The sharpest-eyed commercial Earth-watching satellite ever built soared into space Wednesday (Aug. 13) on a mission to observe our home planet in spectacular detail.

DigitalGlobe's WorldView-3 spacecraft, which can resolve features as small as 1 foot (31 centimeters) across, lifted off atop a United Launch Alliance Atlas 5 rocket from Vandenberg Air Force Base in California at 2:30 p.m. EDT (1830 GMT; 11:30 a.m. PDT) Wednesday.

WorldView-3 is designed to peer through fog and smoke to image Earth's surface in detail unprecedented for a nongovernmental spacecraft, DigitalGlobe representatives said. Further, the satellite will gather data in 29 different spectral bands, opening up a wealth of potential uses for its data. [WorldView-3 Satellite Blasts Off: Photos]

"We can actually tell you, for each individual tree, how healthy it is," Navulur said Tuesday (Aug. 12) during a prelaunch press briefing. "And potentially there are models that can estimate the yield of each individual tree. That's the power of information we are bringing to the table with WorldView-3."

These capabilities should broaden the customer base for Colorado-based DigitalGlobe into areas such as oil and gas exploration, forestry and agriculture, he added.

"We don't play that much in that area today, but I think WorldView-3 will enable us to start accessing those markets," Navulur said.

"A WorldView satellite has a unique capability to basically image anywhere in the world within a day. That's tough to do with an airplane," Dierks told Space.com. "So a company like DigitalGlobe sees an almost limitless market … as they get getter resolution and better imagery."

An instrument aboard WorldView-3 called CAVIS (short for Cloud, Aerosol, water Vapor, Ice, Snow) will help the satellite get a sharp view of the ground despite the presence of dust, soot and other gunk in Earth's atmosphere, Dierks added.

"What you're actually doing with CAVIS is viewing the column in the atmosphere that you are imaging down through, then 'true[ing] up' the color bands of images," he said. "As some of my DigitalGlobe team colleagues say, we can make the Ferrari look red like it’s supposed to."

WorldView-3, which was delivered to a polar orbit 383 miles (617 kilometers) above Earth's surface, joins five other Earth-observation satellites in the DigitalGlobe constellation. The keenest eyes among those other five belong to GeoEye-1, which boasts a resolution of 1.3 feet (41 cm).

This broad coverage will allow the fleet to keep track of natural-resource use and human-rights violations around the world — a key part of DigitalGlobe's vision, Navulur said. (George Clooney's Satellite Sentinel Project uses DigitalGlobe imagery to monitor abuses in Sudan and other parts of Africa, and the company recently lent a hand in the search for a missing Malaysian passenger jet.)

"It's all about seeing a better world," Navulur said. "We want to enable our customers to see the Earth clearly and in new ways, and make the Earth a better place."

WorldView-3 weighs 6,200 lbs. (2,812 kilograms) and measures 19 feet tall and 23 feet wide (5.8 by 7 meters) with its solar panels deployed. A series of thruster and instrument checkouts will take place over the next four weeks, and a data-certification process will follow to make sure the satellite's imagery is up to snuff.

"That is all planned to be done by about three months after launch," Dierks said. Given that all goes well, "then we kind of take a step back, and DigitalGlobe takes over."