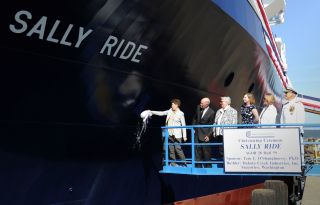 Tam O'Shaughnessy, Ride's life partner and successor as chief executive officer at the science education company Sally Ride Science, broke the traditional champagne bottle across the bow of the R/V Sally Ride during the naming ceremony held at the Dakota Creek Industries shipyard in Anacortes, Washington on Saturday (Aug. 9).

"For the United States of America, I christen thee 'Sally Ride,'" O'Shaughnessy stated just before striking the bow. "May God bless this ship and all who sail in her."

Joining O'Shaughnessy at the event were Bear Ride, the astronaut's sister, and Kathryn Sullivan, the first American woman to conduct a spacewalk, who today serves as the undersecretary of commerce for oceans and atmosphere and the National Oceanic and Atmospheric Administration (NOAA) administrator. [Sally Ride: First American Woman in Space (Pictures)]

NASA Administrator Charles Bolden and the chief of naval research, Rear Adm. Matthew Klunder, were also present for the ceremony.

Like its namesake, the R/V Sally Ride has blazed a new path for women as the country's first academic research vessel to be named for a female scientist and explorer.

"For decades to come, the men and women who will man this ship will look past the horizon, beyond man-made boundaries, searching, learning, and honoring the pioneer [it] is named after – the great Sally Ride," Secretary of the Navy Ray Mabus said in a statement.

Ride, who died in 2012, became famous for launching with the STS-7 crew on space shuttle Challenger in 1983. The first U.S. female astronaut to fly into space, she was only the third woman worldwide to orbit the Earth, following two Soviet-era cosmonauts, Valentina Tereshkova in 1963 and Svetlana Savitskaya in 1982.

After her second launch on the shuttle, Ride left NASA to become a physics professor and a champion for improving science education. She founded her own company, Sally Ride Science, to pursue her passion for motivating girls and young women to pursue careers in science, math and technology.

"I named the R/V Sally Ride to honor a great researcher, but also to encourage generations of students to continue exploring, discovering, and reaching for the stars," Mabus said.

The Navy's 28th auxiliary general oceanographic research ship, or AGOR-28, the R/V Sally Ride will be operated by the Scripps Institution of Oceanography at the University of California in San Diego under a charter-party agreement with the Navy's Office of Naval Research. The astronaut served as a professor and scientist at the institute.

"We appreciate the confidence the U.S. Navy has in UC San Diego with stewardship of its newest, state-of-the-art vessel for global ocean exploration," said UC San Diego Chancellor Pradeep Khosla. "We take tremendous pride in this prestigious and well-deserved honor for [the] Scripps Institution of Oceanography and the legacy of Sally Ride, who served our nation ... as a pioneering astronaut and as a member of our faculty."

The second vessel in the Navy's Neil Armstrong-class of research ships, the Sally Ride was constructed by Dakota Creek Industries based upon a commercial ship design. It is capable of integrated, interdisciplinary, general purpose oceanographic research in coastal and deep ocean areas.

"This ship will be remarkably prepared to enable scientists and students to conduct research in physics, chemistry, biology, geology, and climate science," Bruce Appelgate, Scripps associate director and the head of ship operations said.

The R/V Sally Ride is the fifth ship currently serving the Navy to be christened for an astronaut. Others include the Neil Armstrong (AGOR 27), the Mobile Landing Platform John Glenn (MLP 2), and the Dry Cargo and Ammunition Ships Wally Schirra (T-AKE 8) and Alan Shepard (T-AKE 3).

Scripps is scheduled to take delivery of the R/V Sally Ride in April 2015.

Click through to collectSPACE.com for more photographs of the R/V Sally Ride and to watch a video of the christening.