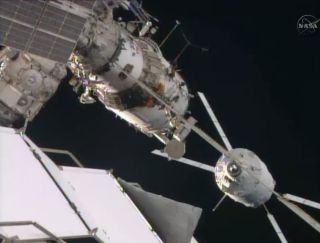 An unmanned European cargo vessel has linked up with the International Space Station for the last time.

The European Space Agency's fifth Automated Transfer Vehicle (ATV-5) joined up with the station at 9:30 a.m. EDT (1330 GMT) on Tuesday (Aug. 12) as both spacecraft sailed high over southern Kazakhstan in Central Asia. The delivery is the final one by Europe's ATV fleet of spacecraft, which has been resupplying the orbiting lab since 2008.

Tuesday's ATV docking at the aft end of the station's Russian-built Zvezda module was "as flawless as can be," NASA spokesman Rob Navias said during a live broadcast of the orbital meet-up. "A perfect rendezvous and a textbook docking." [Europe's Last ATV Space Mission in Pictures]

The huge ATV-5, which is named "Georges Lemaître" after the Belgian astronomer and priest credited with originating the Big Bang theory in 1927, blasted off from French Guiana atop an Ariane 5 rocket on July 29. The vehicle is packed with more than 7 tons of food, water, spare parts and scientific experiments, which the crew of the space station's current six-man Expedition 40 will begin offloading soon.

Also flying to the station aboard Georges Lemaître is ESA's "electromagnetic levitator," a metal-melting experiment designed to reveal how atoms arrange and rearrange themselves. (It's difficult to study the fundamental physics involved in the melting/solidifying processes here on Earth, where gravity plays such a big role, ESA officials said.)

Georges Lemaître also carries some new rendezvous and docking sensors that could be used on future European spacecraft. The cargo ship tested this technology out during a close flyby of the space station on Friday (Aug. 8), when ATV-5 passed just 4.3 miles (7 kilometers) beneath the $100 billion orbiting complex.

The resupply craft will stay docked with the station for about six months, ESA officials have said. Georges Lemaître will then be loaded up with trash and sent to burn up in Earth's atmosphere, as the four previous ATV vessels have done.

Unmanned cargo resupply will go on without the ATV vessels. Russia's Progress spacecraft and Japan's H-II vehicle are still flying, as are two unmanned ships built by American spaceflight firms.

SpaceX's Dragon capsule has flown three of 12 missions to the orbiting lab under a $1.6 billion NASA deal, while Orbital Sciences' Cygnus craft has completed the first of eight runs it will make under a contract with the space agency worth $1.9 billion.

All of these resupply vessels are disposable except Dragon. Rather than burn up in Earth's atmosphere, it makes a soft, parachute-aided ocean splashdown and can be used again.