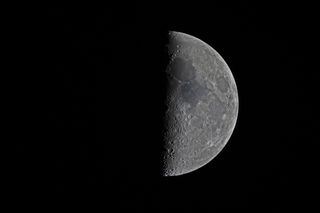 The first quarter moon, captured precisely at that phase, plus 2 seconds. A nice terminator shadow perfectly divides the lunar surface into two. The photo was taken on Jan. 18, 2013, at 17:45:02 CST local time in Jadwin, Missouri, just 2 seconds after the predicted timing given by the U.S. Naval Observatory. I used an atomic clock to time the event — the additional 2 seconds were due to my own human reactions and the functioning of the camera.
(Image: © Victor C. Rogus)

Victor Rogus is an amateur astronomer, a Fellow of the Royal Astronomical Society, in London, and this is the ninth in his series of exclusive Space.com posts about amateur astronomy. He contributed this article to Space.com's Expert Voices: Op-Ed & Insights.

The moon has always been a companion to the people of the Earth. We give it names for the various seasons, write songs about it, use it in artwork and consider it romantic. It causes the tides to rise and fall, and sometimes lights our way in the dark. The moon has fascinated me since I was a small child; I have heard it said that an infant held outside under the moon will often reach out for it as if it were within grasp. It is often the first target for beginning astronomers with their new telescopes, as it is bright and easy to find, and offers a world of fantastic sights unlike any we see anywhere in the visible universe. It is truly the Earth's own.

A friend of mine once pointed out how it has been his extreme pleasure to just watch the faces of people he invites to view the moon for the very first time through his telescope. I can understand, as I have introduced a few folks to a telescopic view of the lunar surface for the first time myself, and I must admit it is a thrill. Many amateur astronomers, eager to view "deep space," seem to overlook our nearest neighbor after a couple of viewings. Sometimes, they do not feel it worthwhile to set up their equipment on moonlit nights, as the reflected sunlight on the lunar surface makes it difficult to see fainter, more distant objects. I, myself, have grumbled when the moon is bright during certain meteor showers, or when I am trying to photograph a faint comet. Just a lovers' spat — I could never be angry with my friend the moon, as it is just doing its thing; never mind about me.

To those who desire to rush past the quarter-million miles (more or less) in their haste to find more distant objects, I say, "Hold on; there is much to see here!" The moon holds many fantastic sights: the great craters (many named for astronomers and scientists from the past), mountain ranges, ridges, valleys, great "seas" — the maria with romantic names. The maria are areas with relatively flat and un-cratered surfaces, once thought to be actual lakes, oceans and seas. These areas were formed by ancient volcanic eruptions. An investment in a good lunar globe or map will aid in your exploration of the lunar surface. And each time you do, you will see something new. As the "terminator" — the line between the light of the sun and the dark of its shadow — slowly moves, the lunar landscape is illuminated in different ways, and more features will be revealed.

One of my favorite things to do while viewing the moon is to study the way the craters are arranged. It is sometimes easy to see which craters are older and which are younger, as the edges of the older craters are often peppered by newer, younger craters. Some observers suggest that the younger the crater is, the lighter in color it is. The brightest crater (or object) on the moon is Aristarchus — it can be seen near the moon's northwestern edge. Also be sure to look for where the effects of lunar gravity have caused crater walls to fall in. While erosion on the moon is much slower than on the Earth, gravity there is still at work!

While these are all fascinating subjects for the small telescope — and I highly encourage my fellow stargazers not to waste those moonlit nights — there is much excitement to be had in imaging the full lunar disc. A great project is to try and capture all of the major lunar phases, but not just at any time during the night — try to make your exposure is as close to the exact moment of the lunar phase as possible.

The exact timing for lunar phases can be found on the U.S. Naval Observatory website. Attempting to make an exposure as close to the moment of the actual event adds a new level of accuracy in its documentation.

Preparing for your best photographs takes a bit of planning and effort. Consider polar aligning your mount the night before, so if your event is early evening, the mount should be pretty well set to use, even if aligning stars are not yet visible. It's also a good idea to make practice exposures, so when the moment comes, you will be ready! To capture the best image, take no shortcuts. [Blood Moon Photos: Total Lunar Eclipse Pictures from April 15, 2014 ]

Of course, there are special occasions when the moon plays a starring role: solar and lunar eclipses , conjunctions, occultations, transits and more. Again, timing is crucial.

Here, we have an image of the moon in total eclipse on April 15, 2014 — a stunningly beautiful sight. As some of you know, I live deep in the backwoods of Missouri, and there are many creatures of the night that lurk nearby while I do my imaging. On this night, the forest was very quiet and calm — that was, until the moment of totality, when the moon turned a shade of blood red, when seemingly hundreds of coyotes all around me howled in an eerie chorus unseen. They carried on for the longest time, until the familiar color and brightness of the moon began to re-emerge. That experience followed a recurring theme for me here in the backwoods, as I follow lunar eclipses and have witnessed the deep connection between coyotes and the moon — especially when the moon is in total eclipse.

This is my story, my love affair with the moon. I can tell you for certain that the moon loves all of us who inhabit planet Earth, and it holds special gifts for those who spend time with it and seek those gifts out. And as for my wife, it’s OK — she's cool with it.

Space.com is hosting a slideshow of Rogus' night sky images.

Rogus' most recent Op-Ed was "Capturing a Comet-Galaxy Conjunction." The views expressed are those of the author and do not necessarily reflect the views of the publisher. This version of the article was originally published on Space.com.