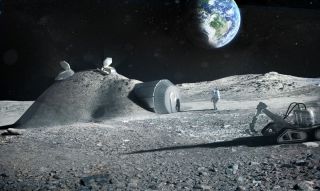 An artist's illustration of what a base on the moon might look like. The European Space Agency is investigating the possibility of 3D printing lunar habitats.
(Image: © ESA/Foster + Partners)

As the world celebrates the 45th anniversary of Apollo 11's giant leap to the moon, some people are eyeing the celestial body's bounty of resources.

But it's unclear at the moment who is allowed to extract and profit from the moon's resources, leading to a growing debate within scientific, entrepreneurial and policy circles — a debate made more lively and complicated by the changing landscape of stakeholders in space.

Lunar exploration is no longer the domain of governmental agencies alone. With activities like the Google Lunar X Prize and private-public partnerships stimulating a "New Space" industry, commercial organizations have business plans and are attracting investment to develop low-cost, regular, reliable access to the moon within a decade. [Home On the Moon: How to Build a Lunar Colony (Infographic)]

Similarly, asteroids are also objects of affection for profit-seeking space enterprise. So goes the moon, so goes the mining and use of choice asteroid real estate?

An entrant in getting this conversation kick-started is Bigelow Aerospace, an American firm eager to open up the final frontier to all of humanity. Bigelow is pushing for the adoption of a series of recommendations supporting the ability of the private sector to enjoy the fruits of any extraterrestrial labor — on the moon and elsewhere — and to operate on "a non-interference basis."

Bigelow Aerospace has requested a "payload review" to recognize the ownership by the company and other U.S. firms of resources they extract. The Federal Aviation Administration’s (FAA) Office of Commercial Space Transportation (FAA-AST) is now working on a response to a Bigelow lunar payload review request.

Discussion of the Bigelow lunar payload review has been undertaken by the U.S. Commercial Space Transportation Advisory Committee (COMSTAC) – an advisory body to the FAA-AST.

COMSTAC was established in 1984 to provide information, advice, and recommendations to the head of the FAA on critical matters concerning the U.S. commercial space transportation industry.

There is Congressional Report language in the Fiscal Year 2015 House Appropriations Bill, said Gold of Bigelow Aerospace, that directs AST to utilize their launch licensing authority in this manner.

COMSTAC was established in 1984 to provide information, advice, and recommendations to the head of the Federal Aviation Administration (FAA) on critical matters concerning the U.S. commercial space transportation industry. [Now Boarding: The Top 10 Private Spaceships]

COMSTAC members said during a December 2013 meeting that the committee "desires confirmation that private entities which extract resources from the surface or subsurface of the moon, asteroids, or other celestial bodies own and may utilize or transfer such resources, once extracted, as they see fit."

Moreover, members said COMSTAC wishes to emphasize "the importance of promoting an environment that is conducive to private sector investment, and the value of a federal legal structure that enables private entities to assert property rights in extracted resources, as well as the right to operate without interference, against other private entities."

The sole reason for "supervision" by the U.S. government, COMSTAC said, "would be to monitor activities to ensure that they are conducted on a noninterference basis and are not contrary to the national security and foreign policy objectives of the U.S."

Further, at a meeting in May, COMSTAC members recommended that the FAA's Office of Commercial Space Transportation (AST) "work to build consensus abroad regarding the right of private entities to operate without interference on celestial bodies and to assert ownership over extracted natural resources." [How Asteroid Mining Could Work (Infographic)]

"Anything that can be done to support the ability of the private sector to protect its assets to extract and utilize resources and to conduct its operations on a non-interference basis is helpful regardless of location and should be encouraged throughout the solar system," said Mike Gold, Bigelow Aerospace's director of Washington, D.C. Operations and Business Growth.

Gold also serves as the chairperson of COMSTAC.

"Many have held out that the United Nations Outer Space Treaty of 1967 is a barrier to protecting our assets and conducting commercial activities on a non-interference basis," Gold said. "Just the opposite is the case."

Gold said that the UN treaty not only allows for conducting private sector activities on a non-interference basis but also demands it.

"Failing to support the private sector's ability to conduct operations in a non-interference basis is actually a violation of both the spirit and the letter of the treaty," Gold said.

The future is now

AST licenses in this regard are limited to the U.S., Gold said, and those companies that seek AST approval — once the U.S. government is aware of where a private sector entity is operating on the moon — can then engage with the international community to prevent harmful interference as described in the UN's Outer Space Treaty.

"So while the Bigelow AST payload review approval request was inherently a domestic activity, the implications are very much international," Gold said.

Gold added that he's thrilled that the Bigelow Aerospace payload review request to the FAA's AST has acted as a catalyst for conversation. "Clearly, the time has come for this issue. The future is now!"

But there's a space stone left unturned, according to attorney Michael Listner, founder and principal of Space Law & Policy Solutions, a think tank focusing on issues related to space law, policy and security.

Listner said it's questionable whether the FAA possesses "the necessary regulatory authority to advance a legal regime for space property rights, including resource rights."

Bigelow's effort, Listner told Space.com, does bring the issue onto the front burner and represents a bottom-up approach to establishing international recognition of space property rights.

"But the question is whether the international community is ready to listen. Timing is everything and the time may not be ripe," Listner said.

"The capitalist system works as advertised only when the resources are effectively infinite," said William Hartmann, a senior scientist at the Planetary Science Institute headquartered in Tucson, Arizona.

"I see myself as the practical pragmatist here. We're entering a new era of resource gathering, and I'd say it's practical to put our brains to work to figure out the best way that these resources might best increase the pleasure of life on Earth … as opposed to falling back on century-old clichés about one economic system or another," Hartmann told Space.com.

In backing off and looking at the big picture, Hartmann raises several red flags.

"We have a situation where the science community is still 'blithely' planning missions to celestial bodies without taking into account that the entrepreneurial/corporate/legal community is moving to claim many of the attractive targets as private property," Hartmann told Space.com. "Should we be moving more publicly and proactively to resolve the impending collision of these two paradigms?"

Hartmann said that the proposals put forth by the entrepreneurial community — namely, that whoever plants a flag on an "island in space" such as the moon or an asteroid can claim private/corporate ownership — are perpetuating a 16th-century paradigm.

"That paradigm, arguably, in the long run, led to greater separation of the 'haves' and 'have-not' nations and families, and ultimately led to international warfare, which continues today, to control the resource-rich parts of the globe," Hartmann said.

"Surely, we must take some time to work out more innovative, realistic legal frameworks aimed at making life better for everyone," Hartmann concluded.

Meanwhile, a new congressional act is digging into asteroid mining.

"Asteroids are excellent potential sources of highly valuable resources and minerals," said Posey, a Member of the House Science, Space and Technology Committee.

"Our knowledge of asteroids — their number, location, and composition — has been increasing at a tremendous rate and space technology has advanced to the point where the private sector is now able to begin planning such expeditions. Our legislation will help promote private exploration and protect commercial rights as these endeavors move forward," Posey said in a July 10 statement.

"The Act is deficient in several areas," said Listner, the space legal expert, "but it does recognize the need to harmonize with international legal obligations and establishes the federal courts as having exclusive jurisdiction over disputes."

This gives the Act credibility, Listner said, "but since it is narrowly focused on asteroids it will not answer the general question of space property rights. The Act will likely not make it out of Committee, but it is a good start for a future bill that may have more teeth once the political environment becomes more conducive."

Editor's Note: Clarifying information was added to this story at 5:05 p.m. EDT on July 25.

Leonard David has been reporting on the space industry for more than five decades. He is former director of research for the National Commission on Space and is co-author of Buzz Aldrin's 2013 book "Mission to Mars – My Vision for Space Exploration" published by National Geographic. Follow us @Spacedotcom, Facebook or Google+. Originally published on Space.com.