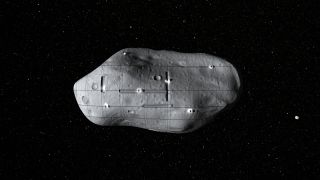 NASA is partnering with the billionaire-backed company Planetary Resources Inc., to launch asteroid-hunting competitions, and they want your help.

Then U.S. space agency and the asteroid-mining firm are seeking to crowdsource new ideas for software to find space rocks that could pose a threat to our planet — or at least be of interest to scientists and cosmic mineral prospectors.

The venture is the first to come out of NASA's Asteroid Grand Challenge, which launched in June. The initiative seeks to detect dangerous asteroids and devise strategies to stop them from colliding with Earth as well as identify asteroids that might be interesting candidates for scientific exploration. [See Photos of Potentially Dangerous Asteroids]

For now, NASA officials have offered few details about the competitions or the types of prizes that might be offered. But space agency officials said they expect to roll out their first algorithm contest with Planetary Resources in early 2014.

According to NASA, the competition will take advantage of sky survey data funded by the space agency as well as Planetary Resources' "Asteroid Zoo" platform that it is currently developing with Zooniverse, a citizen-science website that allows the public to help with research projects in different fields. Planetary Resources officials have said they envision the Asteroid Zoo to be program to let students, citizen scientists and space enthusiasts look for potentially hazardous space rocks and help improve the asteroid-hunting skills of computer software.

Planetary Resources, based in Bellevue, Wash., announced its plans last year to make asteroid-mining a reality. The company hopes to send spacecraft to extract water and precious metals from near-Earth asteroids. It was co-founded by Peter Diamandis (famous for creating the X Prize Foundation) and its investors include Google CEO Larry Page and filmmaker James Cameron.

"Asteroids hold the resources necessary to enable a sustainable, even indefinite presence in space — for science, commerce and continued prosperity here on Earth," Chris Lewicki, president and chief engineer of Planetary Resources, said in a statement. "By harnessing the public's interest in space and asteroid detection, we can more quickly identify the potential threats, as well as the opportunities."

Besides its Asteroid Grand Challenge, NASA has other projects underway to deal with space rocks. Earlier this year, the space agency announced its plans to capture an asteroid, drag it into orbit around the moon and send astronauts to investigate the space rock as early as 2021.