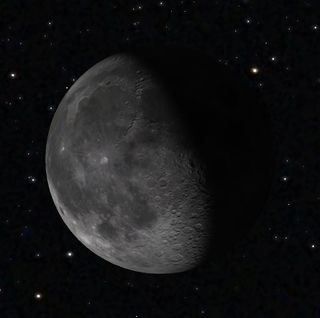 Usually we see the sun rising over the mountains and craters of the moon. This week is an opportunity to watch the sun set. But, where is the moon?
(Image: © Starry Night software)

The most common sight in the night sky is the waxing moon, which we have been watching over the past two weeks.

Starting just after New Moon as a slender crescent, the moon grew to first quarter on July 5, and was full on July 12. If you were paying attention, you would have noticed that the moon rose and set about 50 minutes each night, moving against the background stars in its monthly orbit around the Earth. Last weekend, the Full Moon rose just at sunset.

But where is the moon now? If you look at the evening sky, it's nowhere to be seen. The answer lies in the fact that it rises 50 minutes later each night. On Wednesday (July 16), the moon didn't rise until about 11:30 p.m. local time, and wasn't high enough to observe with a telescope until about 1 a.m. So you will need to stay up late to observe the moon this week. [Amazing Supermoon Full Moon Photos of July]

There is an alternative: If you get up early in the morning and look towards the south, you will see the moon riding high in the daytime sky. The moon is crossing the meridian just at sunrise tomorrow morning, around 6 a.m. your local time.

To the casual observer, the moon's behavior may seem capricious, but it all follows simple laws. The Earth rotates once every 24 hours, which makes nearly everything in the night sky, including the moon, rise every 24 hours in the east, and set every 24 hours in the west. The only exceptions are the stars close to the celestial poles, which are above the horizon all the time.

The second basic motion of the moon is its revolution in orbit around Earth once every 27.4 days. This motion is only noticeable when the moon passes close to a bright planet or star, as it did last week with Mars and Saturn. [How to Observe the Moon (Infographic)]

The third factor is the path the moon follows through the stars, called the ecliptic. This is tilted by 23 degrees to the celestial equator, so that the moon appears to shift north and south.

There have been a number of videos on YouTube recently claiming that the moon is "off its axis." All of these apparitions of the moon are easily explained by the three motions described above. In fact, the moon has been following these patterns like clockwork for millions of years, and nothing has changed.

If you have a telescope, try to take a look at the moon this week. Its topography will look rather different from what you are used to. Most of the time we observe the moon around first quarter, when the Sun is rising in the east (to our right) over the surface of the moon.

This week, the Sun is setting towards the moon's western horizon, to our left, and we see the landscape lit from the left, the opposite direction to what we’re used to.

Perhaps the most striking difference is the moon's Straight Wall, or Rupes Recta, a scarp located close to the eastern edge of the Mare Nubium, just south of the center of the Moon’s disk. Just after first quarter, this appears as a long dark line, a shadow cast by the rising Sun.

Just before last quarter, the Straight Wall is instead lit from the left, so that its face appears, fully lit by the setting Sun, as a bright white line.

Something else you may notice in a telescope looking at the lunar surface this week is an interesting optical illusion. Because the light is coming from an unexpected direction, the lunar surface at high magnifications sometimes appears to invert, so that craters appear as mountains and vice versa. Stare a little longer, and it will usually revert to its normal appearance.

Many years ago, I made systematic pencil sketches of a number of lunar landmarks. I always tried to make at least one drawing with the lighting coming from the opposite direction. This often revealed subtle features in the lunar topography.

I encourage every amateur astronomer to attempt pencil sketches of the things they observe through their telescope. It's amazing how much more your eye can see when you try to sketch. Don’t think of it as "art," but rather as an attempt to record as accurately as possible the pattern of light and dark that you see.

Editor's note: Do you have a great photo of the moon in July's night sky? If you want to share your photos of the moon and night sky for a possible story or gallery, send images and comments to managing editor Tariq Malik at: spacephotos@space.com.

This article was provided to SPACE.com bySimulation Curriculum, the leader in space science curriculum solutions and the makers of Starry Night and SkySafari. Follow Starry Night on Twitter @StarryNightEdu. Follow us @Spacedotcom, Facebook and Google+. Original article on Space.com.