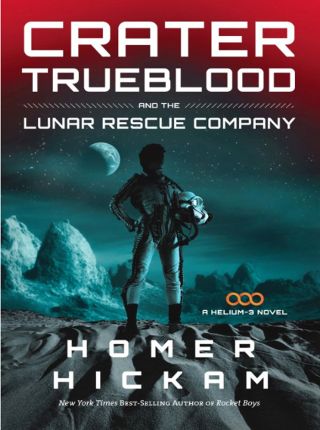 Homer Hickam is worried about NASA — a sputtering, dying federal agency much different from its Apollo, or even Shuttle-era, days — and failing American science education, which is preparing fewer and fewer students for high-tech jobs.

In response, Hickam has written the "Helium-3" trilogy of science fiction novels. Beginning with "Crater" and continuing with "Crescent," the series now brings his latest novel, "Crater Trueblood and the Lunar Rescue Company."

Through the eyes of its teenaged title characters, Hickam shares a story that he hopes will inspire young people to leadership, duty, honor and a love of science and engineering. [Homer Hickam: The Science Behind 'Crater Trueblood' (Op-Ed )]

Below is an excerpt from the book.

Petro brought the tug in low across the inner rim of Oppenheimer crater to hover over the depot. The gates to the underground facility were wide open and there were tracks everywhere.

"Who else knew about this depot?" Crater demanded.

"Colonel Medaris and some of his fuser crews, I guess."

Crater was instantly certain he knew who had cleaned out the depot and why. "The Colonel is going after Maria with all guns blazing," he said.

"In that case, we're out of business," Petro said. "Without missiles and fuel, we might as well head back to Cleomedes."

Crater ignored Petro and kept thinking over the situation. If the Colonel was sending an armada to retrieve Maria, then perhaps that would be enough to do the job. But what if it wasn't? It was still his job to save Maria because it had always been. Even as he thought it, he knew his reasoning wasn't sound. A little voice deep inside warned him that Petro was right. This adventure was over. Saving Maria was no longer an option, and that hurt. Someone else would save her and he'd never see her again.

Crater forced the warning voice inside him away. Doubt was unworthy. He'd never accomplished anything worthwhile by letting doubt take over. "Let's see what's left in the depot."

"Are you crazy?" Petro demanded. "Oh yeah. I forgot. You are. What say you, Crescent? Think we should go home?"

"Yes," Crescent answered forthrightly. "This is a fool's errand."

Crater looked at her and then at Petro. "Listen, you two, we've gone to the trouble of buying a fuser and stealing a tug. Let's at least see if the Colonel left us some missiles. After that, we can decide what to do."

Petro held the tug in a hover over the entry to the depot. "I don't know, Crater. I'm beginning to think we're in something way over our heads."

An uncomfortable silence, not counting the roar of the tug's engines hovering over the depot, ensued. Finally, Crescent said, "We're here. Crater's still determined to do this. Let's at least see what's in the depot."

Crater smiled at Crescent. "Thanks."

Crescent shrugged and Petro shook his head, then landed the tug. Immediately, an angry voice erupted through the tug communicator. "Hey, you! This is Oppenheimer Depot Control. Stop stirring up all that blasted dust. Where'd you come from, anyway?"

"Again? All right, but watch your jets."

The depot guard proved to be an Umlap dressed in an ancient and thoroughly patched pressure suit. After walking inside the depot, Crater said, "Rotten day," the Umlap traditional greeting.

"And not likely to get any better," the Umlap responded.

"I hope you don't need many. The Colonel almost cleaned me out."

The Umlap frowned, which meant he was amused. "Of course not. I was bribed. I was just packing up to take my money and flee. Who are you, anyway?"

"And you're an Umlap. What's your name?"

"Being Alone Suits Him, what's yours?"

"Crescent. Now, Being Alone Suits Him, will you show us your  remaining missile racks or will I need to cleave out your intestines?"

The Umlap was not intimidated. "My intestines always hurt so I wish you would cleave them out. Before I do anything, how about a suitable bribe?"

"How many johncredits do you require?" Crater asked.

The Umlap scowled which meant he was happy. "How about ten thousand? I require cash, of course."

"One gold coin," Crater said. "Otherwise, we'll just go inside and find the racks for ourselves."

"Whatever," the Umlap said and held out his hand, received the gold coin from Crater's kit, and then led them to the only missiles left, several racks of blue missiles with yellow tips.

A chain link gate enclosed the racks. A sign with the international symbol for radiation was posted on the gate. "Nukes!" Petro exclaimed.

"Why not?" Petro demanded. "Big dirty booms can vaporize just about anything."

"True, but I wanted something a little more surgical."

"Good. We've got nothing to work with. Let's go home."

Crater frowned, then turned to the Umlap. "Any kinetic ammunition for our cannons?"

"Load us up with four racks of nuclear missiles and a ton of slugs. That ought to do us."

The Umlap held out his palm. "Another gold coin," he said and Crater gave it to him.

"We also need hydrogen in our blister tanks," Crater said.

"I can run the lines out to your tug," the Umlap said, holding out his hand to be filled by another coin.

After the refueling, Crater, Petro, and Crescent climbed into the tug cockpit and went through the checklist. Crater heard his gillie mumbling and grumbling in his pocket. Crescent's gillie was similarly complaining. When the grumbles from the creatures got ever louder, Petro demanded, "What's with those two clumps of slime mold?"

"What's wrong with you?" Crater asked his gillie.

The gillie crawled up and sat on Crater's shoulder. Distressed, it said.

"Gillie, come out," Crescent said and her gillie crawled up and sat on her shoulder, too. Distressed, it said.

"Are you two arguing?" Crescent asked.

No, her gillie said, we're deciding.

How to tell you what we know.

I will tell it my way, Crater's gillie said.

I will tell it my way, Crescent's gillie said.

You are an Awful Thing.

You are the Superior One.

Crescent's gillie vibrated, then Crescent felt it go limp, drooping over her shoulder. "I think my gillie just gave in," she said.

This is my way, Crater's gillie said, and a blurred picture began to form in the air. It is not easy for me to do this, it added.

The three humans stared at the picture that gradually became focused. It showed a woman on a dirty cot. Her foot was swollen and black. "Maria!" Crater exclaimed, his heart in his throat. "It's Maria! She's hurt!"

The photo changed to show a broken finger and a broken thumb. When the gillie zoomed out, Maria's face could be seen, her eyes closed, her face pale, her hair matted and dirty.

"How did you get this?" Crescent demanded, chilled by what they had seen.

I pulled it down from a commsat feed to Moontown. I keep up with what happens there.

I do, too, Crescent's gillie said, sitting up.

No, you don't, Crater's gillie hissed.

Crescent's gillie drooped again. You're right, I don't. But I should have. I am ashamed I missed it.

You are young. You will learn.

Thank you. I saw something else.

Crater's voice was raw. "What else did you see?"

I will show you, Crescent's gillie said. Another picture formed in the air, this one of an Armstrong City telly reporter. She was talking about a strange occurrence. A shower of meteors had soared in from space and taken out the Lunar Council fuser fleet that had been parked in orbit for storage. The moon was now essentially defenseless. No one knew how it had happened.

Petro, Crater, and Crescent sat in shocked silence. Crescent was the first to speak. "Those pix of Maria," she said, "are horrible."

"The fuser fleet is gone," Crater added. "Probably took the Colonel's rescue fusers with them."

"That means there's nobody left to save Maria," Petro said slowly.

Crescent was quiet for a moment, then resolutely said, "All right, gentlemen. It's up to the Lunar Rescue Company."

She put out her right hand, instantly covered by Crater's right hand, and then, after a moment of hesitation, by Petro's right hand. They looked into each other's eyes, and then Crescent said, "Let's roll!"

The author's most recent Op-Ed was, "Let's Make Apollo Landing Sites American Territory." The views expressed are those of the author and do not necessarily reflect the views of the publisher. This article was originally published on Space.com.