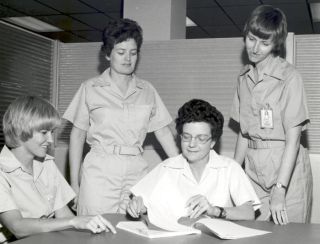 The first all-female crew of scientific experimenters began an exercise on Dec. 16, 1974, to prepare experiments that were used during the Space Shuttle/Spacelab missions.
(Image: © NASA)

In this historical photo from the U.S. space agency, another first for NASA, an all-female crew of scientific experimenters began a five-day exercise on December 16, 1974, to test the feasibility of experiments that were later tested on the Space Shuttle/Spacelab missions.

Inside the GPL, the four women worked under conditions simulating, as nearly as practical, those that would exist in a space station in Earth orbit, excepting, of course, weightlessness. Air circulation, temperature, humidity and other factors were carefully controlled. The test was conducted at NASAs Marshall Space Flight Center, Huntsville, AL, where the GPL is part of the centers Concept Verification Test (CVT), a project oriented to reducing future costs of experimentation in space by involving potential experimenters early in the development cycle of their hardware.