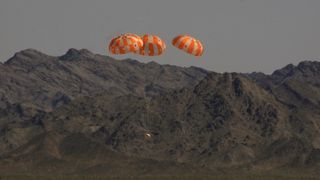 The Orion capsule — designed to take astronauts deeper into space than ever before, to destinations like Mars and an asteroid dragged into orbit near the moon — will depend on parachutes to slow its descent when it re-enters the atmosphere after spaceflight. Parachutes will be used to slow Orion down when it comes back from its first spaceflight, which is currently scheduled for December.

In order to test the effectiveness of the parachutes, engineers working on Orion are launching a series of parachute tests in Arizona. Today's test was the 14th and the most difficult test for the system, officials said. In total, there will be 17 tests of the parachute system before the December spaceflight. [See a video of the successful drop test]

"We've put the parachutes through their paces in ground and airdrop testing in just about every conceivable way before we begin sending them into space on Exploration Flight Test (EFT)-1 before the year's done," Orion program manager Mark Geyer said in a NASA statement. "The series of tests has proven the system and will help ensure crew and mission safety for our astronauts in the future."

During today's test, Orion was dropped from a C-17 aircraft 35,000 feet (10,668 meters) above the Arizona desert, marking the first time the parachutes were tested from such heights, NASA officials said. After the capsule was released, Orion fell for 10 seconds, increasing speed and adding stress to the parachutes once they were released, space agency officials said.

For EFT-1, Orion will launch atop a Delta 4 Heavy rocket to an altitude of 3,600 miles (5,800 kilometers). As it comes back to Earth, Orion will be traveling at about 20,000 mph (32,200 km/h) and be forced to withstand temperatures near 4,000 degrees Fahrenheit (2,200 degrees Celsius). Ultimately, the parachutes will need to slow Orion down to about 20 mph (32 km/h) to splash down safely in the Pacific Ocean, NASA officials said.

NASA will perform another parachute test in August, dropping Orion with the planned failure of one main parachute and one drogue chute, which is used for stability.