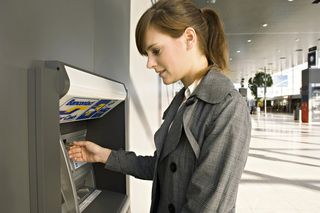 The same technology that controls spacecraft circling hundreds of miles above Earth is now being used to sniff out bank fraud.

Space exploration software has already been adapted for other uses such as brain scans, but now it's been translated into a sophisticated system called Feedzai that is designed to detect cyberscammers. Aerospace engineers from the European Space Agency (ESA) created the system based on the same data-crunching software that control spacecraft.

For a space mission to run smoothly, its software must be meticulously tested beforehand. Clusters of computers, designed to mimic each element of a spacecraft, have to simulate the mission in far less time than the actual flight, which means they need to process huge amounts of data in real time.

"If we talk about a bank, you need to process thousands of transactions every single second," Paulo Marques, the founder of Feedzai, said in a statement.

The translation from space mission to fraud protection is not that simple. Spacecraft follow rules. The software is designed to alert operators when anything is out of the ordinary, like a change in temperature. Operators know there are only a few things that could be causing a temperature change.

People are less predictable. Detecting fraud requires the software to learn the patterns of an individual's or company's spending habits. The software can store up to four years of data that allows it to create a personal spending profile for each customer, and better detect out-of-the-ordinary behavior that could be a sign of fraud.

Bank fraud is a serious concern and will likely only become more problematic as more and more purchases are made online. Each year $11.4 billion is lost in credit card fraud. The new software is an improvement because it is able to detect fraud 30 percent earlier than traditional means, according to Feedzai.

Every electronic purchase made in Portugal, the country where the software was developed, is now run through the system. Feedzai is spreading across the globe and now screens almost $230 billion worth of electronic payments in the United States, company officials said.