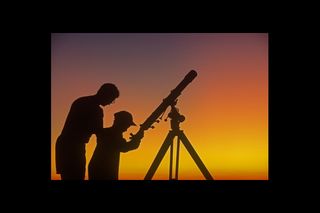 A father and son look through a telescope at sunset.
(Image: © stockxpert)

Space fans can give their dads a little piece of the cosmos with two off-world gifts this Father's Day (June 15).

You can honor dads in a cosmic way for a good cause this Father's Day. Dads everywhere can enjoy a space-age celebration with a Mars crater named in their honor, and anyone can send pictures of the special dads in their lives to the edge of space aboard a suborbital helium balloon.

Students with Earth to Sky Calculus will send a picture to space in honor of a dad on Father's Day. For $49.95, the students will fly an image of your choosing up 120,000 feet (36,576 meters) into the air aboard a suborbital helium balloon and then take a photograph of the image at that height. The photograph will include the curvature of the Earth stretching out below the photo, according to astronomer Tony Phillips at Spaceweather.com. Profits from the picture initiative will go toward student research.

Uwingu, a company that raises money to fund space-centric activities, is offering a special deal to people that name a crater on Mars in honor of dads for Father's Day. The company will issue a special certificate in honor of the naming. Plus, the new crater names will eventually be used on a map that flies to space with Mars One — a company with a plan to eventually put humans on the Red Planet. [The Boldest Mars Mission in History]

"Dads of all ages will love this really unique, out-of-this world Father’s Day gift for 2014," Alan Stern, planetary scientist and founder and CEO of Uwingu, said in a statement. "Dad may not be able to go to Mars himself this year, but his name can be put on the first-ever public naming effort for Mars, and he'll know that it'll be going to Mars, too, when Mars One launches its first lander mission in 2018."

It costs about $5 to name the smallest craters on the Martian surface, with prices rising as the craters get bigger. People have named about 11,690 craters, with close to 585,000 craters still available for naming on the Uwingu map.

Half of the money Uwingu makes from the crater naming venture will go toward the company's Uwingu Fund, which grants money for space research, education and exploration. If every available crater is named, Uwingu could raise over $10 million for the Uwingu Fund, company representatives have said.