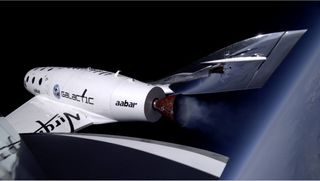 After firing her hybrid rocket motor above Mojave Air & Space Port, SpaceShipTwo coasts up to an altitude of 71,000 feet on a supersonic test flight, Jan. 10, 2014. At 71,000 feet, the sky is already darkening to black, and the curvature of the Earth is evident; a full space mission will go many times higher.
(Image: © Virgin Galactic (via Facebook))

NASA and the private company announced that Virgin will fly 12 technology experiments on the first commercial research flight of SpaceShipTwo, which has undergone several powered test flights in the past year.

"The payloads on this flight represent a cross-section of promising space exploration technologies that could benefit future NASA missions," Christopher Baker, the flight opportunities program manager at NASA's Armstrong Flight Research Center, said in a statement. [The Top 10 Private Spaceships]

There will be a mix of experiments from NASA, universities and commercial companies flying aboard, testing concepts ranging from fluid behavior to 3D printer improvements.

The selected experiments are:

Learn more about the experiments via NASA: http://www.nasa.gov/ames/nasa-virgin-galactic-announce-payloads-for-spaceshiptwo-flight/#.U5YpRpSwI72