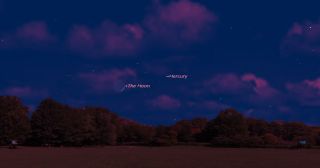 ​The planet Mercury shines near the right of the crescent moon in the north-northwest on May 30, 2014, as seen in this view taken at 9 p.m. local time for observing locations at mid-northern latitudes.
(Image: © Starry Night Software)

It has been a great couple of weeks for those who have sought out the so-called "elusive planet" Mercury. This speedy, rocky little world has been readily visible, appearing as a bright "star" low in the west-northwest sky about an hour after sunset and tonight the moon joins the show.

To spot Mercury tonight (May 30), wait until about an hour after sunset and look low toward the west-northwest horizon. You should see the crescent moon just 5-percent illuminated and two days past new phase.

On Sunday (May 25), Mercury arrived at its greatest eastern elongation — it's greatest angular distance to the east of the sun in the sky — measuring a respectable 23 degrees. Your clenched fist held at arm’s length measures roughly 10 degrees, so Mercury was positioned more than two fists from the sun and visible against a relatively dark late-twilight sky.

Mercury has since started approaching the sun and has begun to slowly lower in the west-northwest sky at dusk. In addition, Mercury is also beginning to fade noticeably; a telescope reveals it as a crescent phase and that crescent is gradually narrowing.

Consequently, the innermost planet is undergoing a progressive fade-down. In fact, Mercury will dim from magnitude 0 on May 21 to magnitude +1.2 on June 1 — that's a three-fold drop in brightness.

In all likelihood, Mercury will become too low and too faint to be visible against the bright twilight glow by around June 3, but if you haven't yet had a glimpse of it, there is still some time left and on Friday evening, you'll have a nice benchmark to help you locate it in the form of a slender crescent moon.

The very next night (Saturday), the moon will have lifted up and away from Mercury. Appearing slightly wider and easier to see, you’ll find it hovering about six degrees below the “king” of the planets, Jupiter. So within a time span of 24 hours, the moon will visit first with the smallest planet, Mercury, on Friday evening, followed the next evening by a visit with the largest of the planets, Jupiter.

Joe Rao serves as an instructor and guest lecturer at New York's Hayden Planetarium. He writes about astronomy for Natural History magazine, the Farmer's Almanac and other publications, and he is also an on-camera meteorologist for News 12 Westchester, N.Y. Follow us @Spacedotcom. We're also on Facebook and Google+. Original article on Space.com.