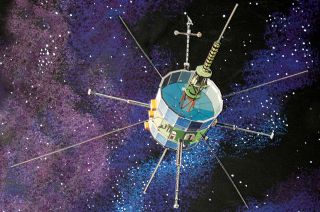 A 36-year-old spacecraft that NASA once thought might be returned from space and put into the Smithsonian may instead soon resume its original mission thanks to the efforts of a private group.

The International Sun-Earth Explorer 3 (ISEE-3) originally launched in 1978 to study solar wind before being diverted to chase after comets in the mid-1980s. Orbiting the sun ever since, it is now making its long-anticipated return to the vicinity of the Earth, where a newly-crowdfunded effort is gearing up to "reboot" the probe into service.

On Wednesday (May 21), NASA announced it had signed an agreement with Skycorp, Inc. of Los Gatos, California, to allow the company and its partners Spaceref Interactive and the Space College Foundation to attempt to contact, and possibly command and control, the all-but-abandoned spacecraft. [NASA's Vintage ISEE-3 Spacecraft in Pictures (Gallery)]

"The intrepid ISEE-3 spacecraft was sent away from its primary mission to study the physics of the solar wind extending its mission of discovery to study two comets," John Grunsfeld, astronaut and associate administrator for NASA's Science Mission Directorate, said in a statement. "We have a chance to engage a new generation of citizen scientists through this creative effort to recapture ISEE-3 as it zips by the Earth this summer."

ISEE-3, which in 1978 became the first satellite to enter a halo orbit at a gravity-stable Lagrange point between the Earth and the sun, made history again in 1985 as the first probe to visit a comet. The repurposed ISEE-3, renamed the International Cometary Explorer (ICE), passed through the tail of Comet Giacobini-Zinner, and then repeated the feat a year later with the famous Halley's Comet.

ICE was then redirected to study coronal mass ejections from the sun, before being decommissioned in 1997, and although it was still in space, donated to the Smithsonian. (The satellite's 2014 approach to Earth was considered as a possible opportunity for its recovery and display.)

But armed with the knowledge from a 2008 data check that revealed all but one of the barrel-shaped spacecraft's experiments were still functioning, a private group stepped forward with a seemingly-simple plan: contact the ISEE-3 spacecraft, command it to fire its engines and re-enter a halo orbit near the Earth, and then resume its original 1978 mission.

The ISEE-3 Reboot Project's team, which includes Robert Farquhar, the former NASA mission design specialist who was responsible for turning ISEE-3 into ICE 30 years ago, successfully heard from the spacecraft this week by using the world's largest single-dish radio telescope, the Arecibo Observatory in Puerto Rico.

With the Space Act Agreement signed, the project's team will next try to "talk" to the space probe, using software to virtually emulate 1970s-era hardware that no longer exists.

The window for all this to work is short. If the commands to reposition the ISEE-3 spacecraft are not sent by mid-June, the satellite will swing by the moon and continue to orbit the sun.

Though NASA is not providing any funding for the project, the agency has shared technical information with the team to help them communicate with the ISEE-3 spacecraft. If the project is successful, any new data received from the probe will be shared with the science community and the public, which NASA officials say will provide a unique tool for educating students and the public about data gathering and spacecraft operations.

The data will also provide information about the effects of the space environment on the 36-year old spacecraft.

According to NASA, this is the first time that it has agreed for the use of a spacecraft the agency is no longer using or ever planned to use again.

This is not however, the first time that the reboot project's leaders have worked to save NASA history. Dennis Wingo of Skycorp and Keith Cowing of Spaceref also lead the on-going Lunar Orbiter Image Recovery Project, which since 2008 has been digitizing the original data tapes from the probes NASA launched to the moon in the mid-1960s.