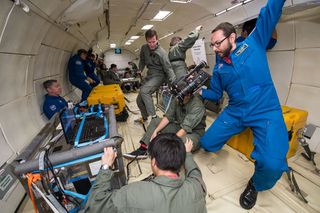 In April 2014, Space.com shadowed a group of students from the University of California, San Diego who were selected by NASA to test an experiment on board a zero-gravity flight.
(Image: © NASA)

Before I left for Houston to go on a weightless flight, I explained to my mother how the escape from gravity works: The plane flies a series of parabolas. From an altitude of about 20,000 feet (6,100 meters), the aircraft quickly ascends maybe another 20,000 feet into the sky and then plummets. It climbs and drops over and over again — 30 times — creating short periods of weightlessness at the crest.

"What if you really, really don't like it? Can't they stop?" she asked, her face turning grim.

For those who hate flying, this path might sound like a nightmare. But for people who grew up envying astronauts, as I did, a weightless might be the next best thing to space travel and a once-in-a-lifetime chance to study some aspect of life away from Earth. Last month, I shadowed a group of undergraduates from the University of California, San Diego who defied gravity in the name of science. The experience was both euphoric and eye-opening, though I'm still finding it difficult to describe the totally alien sensation of weightlessness. [See Photos from the Weightless Flight]

The team was among dozens of ambitious students across the United States who gathered at Ellington Field in Houston after spending the last several months preparing an experiment to fly aboard the plane as part of NASA's Reduced Gravity Education Flight Program, which uses flights by the commerical Zero Gravity Corporation (ZERO-G Corp.) to perform weightless science.

The program is competitive. Of the 50 detailed proposals submitted last year, just 18 were selected to participate in one of the 2014 flights, said program manager Frank Prochaska. During our flight week in April, there were students from Stanford and Caltech testing how a heart monitor would work on a dummy. There was a Dartmouth crew investigating how the eye changes in a zero-gravity environment. The UCSD students I was following were lighting small fires in a triple-contained acrylic box to measure how four different biofuels burn without gravity.

"The future of this country and this world is going to involve reduced gravity," Prochaska said. "It's going to involve space and engineering projects in a reduced-gravity environment, and that is something that not a lot of people have experience with. These students have the opportunity to be able to engineer something for that environment and to experience it themselves."

In Prochaska's eyes, the experience of weightlessness is more than a reward for all the nights and weekends the students gave up to work on their experiments.

"As soon as they feel it for the first time, you can see the light bulbs going off in their head like, 'Oh man, I should have redesigned this' — it's immediate learning," Prochaska said. "I think a program like this is really going to be integral to raising America's engineers."

Led by Sam Avery, a senior in UCSD's aerospace engineering department bound for graduate school at Stanford, the team was made up of eight people: two ground support crew members and two teams of three fliers. Prone to settling arguments with equations, the students were focused in the days leading up to their flights. They spent hours inside a hanger at Ellington Field, calibrating their experiment and practicing how they would manipulate the buttons and switches on a control panel during each short period of microgravity. As their team journalist, I had the plum job of observer.

Fire behaves strangely when it's free of gravity's restraints. On Earth, flames flicker in the shape of a teardrop, thanks to gravity-driven convective flow. Hot air expands and rises around a fire as gravity causes colder, denser air to sink below. This process draws fresh oxygen to the fire and pushes out products of combustion (carbon dioxide, light and heat).

Without gravity, flames burn more slowly and in an eerily spherical shape because they rely on the gradual process of molecular diffusion to feed oxygen to the flame. This actually makes certain characteristics, like combustion rate, easier to study. With better knowledge about the burn rate of different fuels, scientists develop more efficient biofuel engines on Earth. What's more, a better understanding of fire's behavior in microgravity could help engineers design more effective fire extinguishers for astronauts on the International Space Station.

The students built an elaborate contraption so that they could safely light small fires on the plane and measure the burn rate of four different fuels: butanol, ethanol, E85 and kerosene. (E85 is a fuel made up of 85 percent ethanol and 15 percent gasoline. A local alternative fuel company, Pearson Fuels, donated UCSD's supply.) Two medical syringes, each filled with a different fuel, sat on opposite sides of their acrylic box. Pressing a few buttons caused one syringe to glide forward and squirt a blob of fuels onto filaments arranged like crosshairs. Once the fuel adhered to the wire cross, a lighter lurched ahead to set the droplet on fire. Cameras and sensors inside the box monitored how the fire burned.

NASA had four flights booked for the week of April 7 on G-Force One — a modified Boeing 727 operated by the commercial company ZERO G Corp. The first group of UCSD flyers — Andrew Beeler, Victor Hong and Henry Lu — would test ethanol and kerosene during a flight on April 10. I was scheduled to fly the next day to watch the second group — Avery, Semaan Farah and Joshua Siu — ignite butanol and E85.

There's always a chance that bad weather could cause flight delays or even cancellations. Last July, a UCSD team testing an early version of the same biofuel experiment got just one group of fliers off the ground. (Beeler was a member of the other unlucky group that boarded the plane only for their flight to be canceled.) I could sense some anxiety among the students. Some didn't want to get their hopes up until the flight actually happened.

Beeler got lucky this time. His flight went off without a hitch, and I watched him pump his fist as he got off the plane with his teammates on the afternoon of April 10. The three students succeeded in their goal to light about 10 fires for each fuel.

On the morning of my flight, all passengers, including myself, zipped up Army-green flight suits and walked in a straight line out to the plane. The flight crew members were wearing onesies, too, though they were colored bright blue (presumably, for easy identification during the chaotic ride). Parts of the takeoff bore a comic resemblance to a routine commercial trip. We settled into the back of the cabin in a few rows of seats with familiar comforts like fold-down trays and armrests. A ZERO-G attendant even asked me if I was willing to assist in the event of an evacuation, as I was sitting in an exit row.

After the plane took off and leveled out over the Gulf of Mexico, we unbuckled our seatbelts and scurried to the padded, seat-free part of the fuselage that looked like a science fair, complete with college banners and rough-and-ready experiment equipment. I sat against the cabin wall and made sure I had a strap to hold on to. I felt like we waited forever for the first parabola, but that might be because the injection of a drug called scopolamine, which I took to prevent motion sickness, seemed to slow everything down.

In earlier iterations, NASA's weightless flight was dubbed the "Vomit Comet" because passengers — even astronauts prepping for their missions — famously threw up during the voyage. It's not a nickname NASA likes. During our barf briefing, the program leaders tried to set the record straight: Thanks to the effectiveness of scopolamine, they've had a lot of "no-kill" flights. (A "kill" is a puker.)

As the flight crew made official-looking signals to each other and spoke over their headsets, the pilot pointed the plane's nose up for our first parabola. Without any windows, it was impossible to tell that we were climbing at a steep incline. But the upswing produced a force twice that of Earth's gravity for about 30 seconds, and my body felt heavy. Just turning my head made me dizzy, so I fixed my eyes on a screen that showed the level of gravity we were experiencing. When those numbers rapidly dropped below 1 (Earth's gravity) and got close to zero, weightlessness kicked in, but I didn't fully realize it was happening until a few curls of my own hair drifted in front of my face. [Fun in Zero Gravity: Weightless Photos from Earth and Space]

After the three UCSD students who flew the day before got off the plane, I asked Beeler what weightlessness felt like. "It just turns into nothing," Beeler said. "Suddenly, it was just nothing." I finally understood what he meant.

The combination of having six degrees of freedom but little control over my body was totally bizarre, and slightly frustrating. I felt like the world's lamest superhero — I had gained the ability to fly, but I had no way to independently propel myself. I proudly suppressed my instinct to flail and air-swim. ("Don't do it. It's boring," Prochaska warned as he passed through the cabin before our first parabola.) More than wanting to look graceful for the in-flight photographers a la Kate Upton during her most recent Sports Illustrated stunt, I didn't want to kick over any experiments.

After a couple of parabolas to get used to weightlessness, Avery, Siu and Farah got straight to work on the experiment. Each period of microgravity lasted just 20 to 30 seconds, which didn't allow much time for mess-ups and glitches. But like the group before them, they collected the data they needed, igniting balls of fuel sometimes no bigger than the size of my fingertip in diameter.

During the flight, I often tried to steady myself to peek at the tiny fires inside the box. The flames looked wildly different from the candle-like fires I saw during the team's practice runs inside the hangar. The bluish orbs were incredible to see firsthand, but they meant much more to the students who had been working on this experiment long before I met them.

"We've been seeing this combust in gravity for a whole year and a half before we got to see it in zero gravity," Lu said. "Once I saw it, the fuel was such a huge ball of flame, and it was just really amazing."